Chicago-One News brings you its first news story involving a habitual violent offender who is now in custody again under serious violent felony allegations. This story is sourced from several reputable information sources and compiled here into one record.

31 year old Jarqueese O'Brian Henigan was positively identified as the offender. On March 9th, 2017 at or around 8:20PM in the 3700 block of N. Fremont Street. Henigan approched the victim armed with a handgun as she was exiting the garage. Henigan then sexually assaulted the victim and forced her into the trunk of a vehicle. Henigan then drove to several locations in the Chicagos Southside before striking a tree. Henigan was identified and arrested on March 17th, 2017 in the 10300 block of S. Halsted. 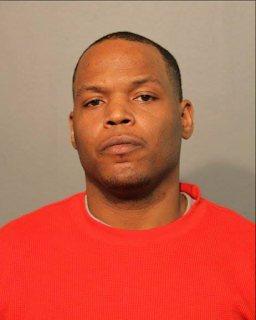 Henigan is charged with the following crimes in connection with this attack:

This Daily Herald article speaks about a robbery Henigan committed in 2011.

CWB published this map of the route Henigan is said to have taken with his latest victim.

Per the above work done by CWB, Henigan has learned how to take advantage of the many chances he's been given by way of reduced time in prison.

"Prior to that, Henigan was given a 50% discount off of a ten year prison sentence that he earned in 2006 for attempted aggravated discharge of a firearm in Lake County."

"And, before that, he was given another 50% discount off of a four-year sentence for burglary in Lake County."

The above quotes are credited to the Crime in Wrigleyville & Boystown news site.

Henigan's Out of State Warrant

Henigan's out of state warrant was issued for allegations of Rape and Robbery. The Cook County Circuit Court has said he will be extradited to face those charges once his Illinois case has concluded. (Updated March 20th, 2017)

CWB also discovered this next bit of information.....

"Wilmette authorities charged him with excessive speeding, fleeing, and eluding police in September 2015.

Then, he went missing until he was picked up in Tulsa, Oklahoma, last August on an Illinois prison fugitive warrant.

Details about what happened after that were not immediately available."

Henigan was in Central Bond Court Sunday, where he was held without bond by Cook County Circuit Judge Laura Sullivan, who said "I do find the proof is evident and the presumption is great," Sullivan said. "I also find that the defendant presents a real and present danger to the public that denial of bail is necessary to prevent the fulfillment of the threat he presents.". Assistant State's Attorney Amari Dawson represented the State in this hearing. (Updated March 20th, 2017)

Police investigation revealed that Henigan used or attempted to use the victim's credit cards at two locations near his hom. Video surveillance recordings were clear enough for police to cross-match his face against their own database using facial recognition technology. Electronic forensic evidence also played a key role, as he also used the victim's phone. When police analyzed the victim's phone, they found the suspect's address in the Google Maps application, and it matched the address Henigan used when he was released from prison in October 2016.

Henigan was spotted by police Friday while walking near his home. When officers attempted to arrest him, Henigan pulled away and tried to run. Police placed him in a wrist lock and arm bar while putting him into handcuffs, according to a police report. Henigan was taken to Illinois Masonic Medical Center after he complained of pain in his wrist.

Lauren Jiggetts at NBC 5 Chicago contributed to this piece.
Posted by Chicago-One News at 5:00 AM