April 15th, 2017 was an evening of aggressive party crashing for 24 year old James Warren. Warren, who is from the area of the Dan Ryan Woods on Chicago's south side Auburn Gresham neighborhood on police beat 614, found himself with a friend in the Lakeview area of the city. At some point during the 11PM hour, Warren and his friend spotted a party going on that was hosted by a local university student and his roommate. Several of the party guests attend DePaul University according to a witness for the state.

The party was held in the 2900 block of N. Sheffield. Upon being told by the party host that he wasn't wanted or welcome, Warren proceeded to shove his way into the apartment, using a group of arriving guests as his leverage. While at the party, Warren engaged in unwanted touching of several women and did so while acting aggressively. Warren and his friend agreed to leave, but on his way out, Warren slapped and punched two guests.

Warren returned once more and started asking people there if they wanted to fight and telling them he had a gun. Warren left again, but returned at or around 1:15AM on April 16th, 2017, using a back entrance to gain unauthorized entry for a third time. At this time, Warren opened fire, striking a male victim four times in his thigh, ankle, and knee.  Edit - April 24th, 2017: Correction - The Cook County Sheriff has knowingly and INTENTIONALLY misled the public by making it appear as if Warren has been charged with 1st Degree Murder. The victim is STILL ALIVE. 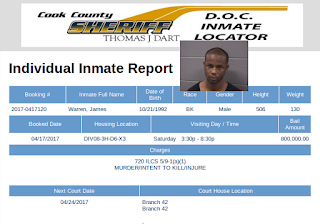 Warren's original charges were attempted first-degree murder and aggravated battery - firearm and stand as such.

Warren has a history as an adult with the Chicago Police Department that started on July 21st, 2015. That arrest brought charges of Possession of a Controlled Substance.Warren's second arrest occurred on April 9th, 2016, and he was charged with Domestic Battery - Make Physical Contact. Warren's newest arrest was for the new charges he now faces. Warren's complete history is detailed directly from Chicago Police Arrest records below. 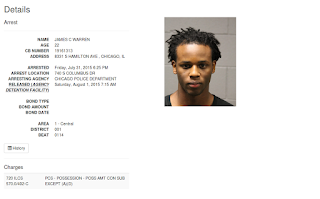 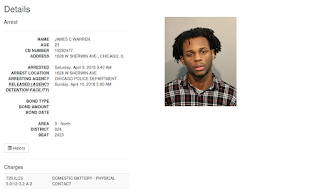 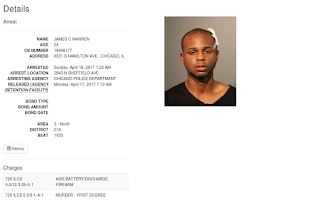