On April 22nd, 2017, Chicago Police Spokesman Anthony (AJ) Guglielmi tweeted that a suspect named Reggie C. Catayong had been arrested after following a Chicago Police Officer after court and threatening that officer. Chicago Police had obtained a search warrant for Catayong's home after that incident, and found what Guglielmi said was a "significant drug operation inside his home" 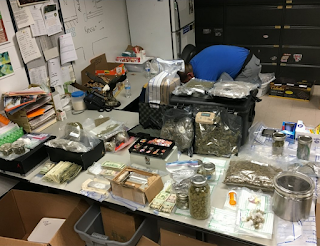 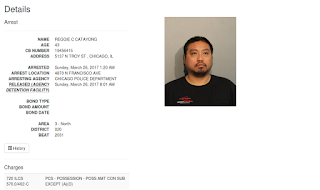 This is Reggie Catayong's Cook County Jail Individual Inmate Report. Reggie has been held by the Cook County Circuit Court with NO BOND. 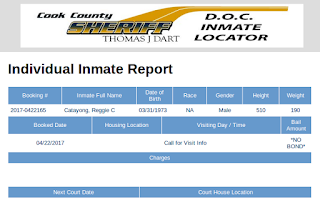 Apparently, the County Sheriff was updating the record when Chicago-One checked-in on Catayong. The full record should be up within 24 hours. 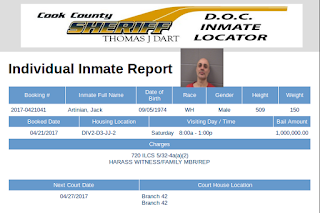 The two were subsequently stopped and taken into custody in the alley of the 5100 block of N. Troy St. in the city's North Park neighborhood. Police say Artinian was driving the vehicle that followed the officer.

Information from the bond court hearing is courtesy of Liam Ford and Will Lee at the Chicago Tribune.

Catayong was in bond court today at 26th & California. Today, we learned that
when the tactical officers executed the search warrant, they found about 20 pounds of marijuana, about 200 ounces of liquid THC (the primary chemical that causes the marijuana high), about 13 ounces of narcotic mushrooms, 3 ounces of cocaine and almost 20 ounces of liquid steroids, according to a police spokesman. Other drugs included 153 miscellaneous pills, 46 steroid pills and 17 MDMA or ecstasy pills.

Police confiscated a replica handgun and $14,333 in cash, 2 gold bars, 18 silver bars worth about $1,800 each, two gold pieces, 51 rare coins, 62 dollar coins, 26 half-dollar coins and 73 casino chips, according to police. Catayong has also been charged with felony possession of hypodermic needles.

Jack Artinian has been held in Cook County Jail in lieu of 1 Million dollars bond. Artinian was in bond court yesterday.
Posted by Chicago-One News at 2:42 PM