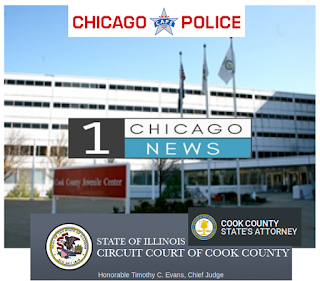 Yesterday the public learned only some of the nightmare details of what was done to a 15 year old girl from Chicago's Lawndale community. The 15 year old male, referred to in Juvenile Court only by his initials, was held in juvenile detention by Cook County Judge Patricia Mendoza after she said "the lack of a criminal history is not a get out of jail free card,” then saying "this case is absolutely heinous and one of the most serious cases I have seen.”

The public learned in this recent hearing with the 15 year old male that Cook County Assistant State’s Attorney Maha Gardner representing the state on that day, laid out a case in which the victim allegedly encountered the boys in a local park on March 19th, then lured into a basement that same day, and then raped by the attackers. Gardner said the state had learned that it was the 14 year old boy who had told the victim she could “have sex the easy way or the hard way” and threatened her with a pit bull attack if she tried to escape.

The allegations continue with Gardner saying the 14 year old then held her down and raped her. We now know that when police in the 10th District found the victim, she was found at 16th st. & Independence Blvd.

Liliana Dago is a Public Defender with the Cook County Public Defender's Office, and  is assigned to represent the 15 year old male in this case. Dago said in court there was not enough evidence for several of the sexual-assault charges against the 15 year old male and that he did not engage in intercourse with the victim. ASA Gardner then fought the Public Defender, arguing that while the boy may not have had intercourse, the charges were appropriate because he was there and videotaped another person raping the girl. “They were acting in conjunction, under the theory of accountability, he can by all means be charged with this.” was the exact argument Gardner brought to her legal arsenal in the courtroom.


What Happens in Juvenile Court?

The Juvenile Court is very similar to other courtrooms. The State, the defense attorney(s), a Circuit Court Judge, Cook County Sheriff's Deputy, Court Reporter, Court Clerk, and other interested parties gather for the case to be heard. The minor is brought into the courtroom, and the Judge announces the proceedings before the court. This includes the reading of the formal criminal complaint. There is an opportunity for the defense to plea, and the court then makes sure the plea is entered voluntarily by the defendant of their own free will. The court then advises the defendant of the consequences of their plea.

The court makes a decision as to whether the juvenile should be held, or allowed to go home pending other court hearings, trial, etc.

The Honorable Patricia Mendoza hears cases in Cook County Court Calendar 53. Mendoza is an Associate Judge. Mendoza was elected to the bench on May 4th, 2005 after serving as an Assistant State's Attorney General, and was sworn-in on June 1st, 2005. Mendoza has now been on the bench for 11 years and 11 months. Her background is an education at DePaul University College of Law from 1981 to 1984, and she was the Chief of The Civil Rights Bureau for the State of Illinois Attorney General's Office prior to becoming a Cook County Associate Judge in the Juvenile Court.

Graduated from Loyola University Chicago in 2005 with a B.B.A. in International Marketing and Spanish. She started Loyola in 2001. University of Wisconsin Law School 2005 to 2008, graduated with a J.D. and became an Assistant State's Attorney in Cook County in January of 2010.
Posted by Chicago-One News at 9:47 PM