This evening in Chicago's Chinatown community, Chicago Police received a call of a shooting at the Chinatown Feeder Ramp. Police and Fire officials say they believe the shooting occurred at or around 5:10PM, and that Chicago police were coordinating their investigation with illinois State Police to find out if the shooting may have taken place on the expressway.


The violent shooting took place near Cermak and Wentworth. Two Chicago Police Officers responding to the shooting call were involved in an accident at 31st & Shields, which left two other people injured as well. Those two people were transported to Northwestern Memorial Hospital and were said to be in serious to critical condition. The involved Police Officers were taken to Stroger Hospital by the Chicago Fire Department EMS Service. At this time, one CPD Officer is in serious condition, the other in good condition.

The Chicago Tribune's Peter Nickeas live - tweeted the tragic incident as it unfolded. 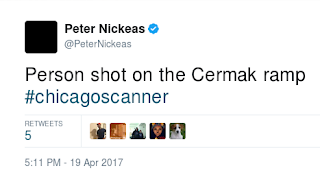 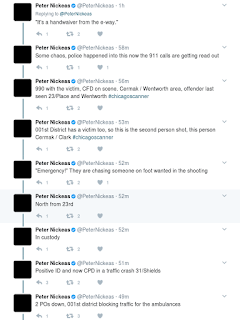 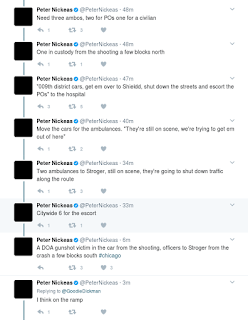 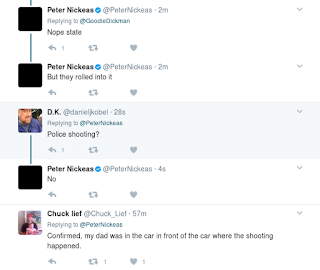 According to the Chicago Tribune, "Both exit and on ramps were closed. Three Chicago officers and a state police trooper searched the weeds on the side of the on-ramp for evidence. Three helicopters, at least one of them a police chopper, circled the area above. About an hour after the shootings, an ambulance arrived, and a handcuffed man was placed inside."

As seen in the last tweet to Nickeas, one Twitter user said his father was on-scene in one of the nearby vehicles. the tweet appears to have been sent to confirm the incident.

Chicago Police are continuing their investigation at this time.

Posted by Chicago-One News at 7:04 PM