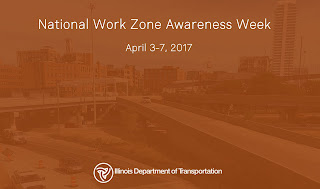 Drivers and pedestrians alike have tuned into 530 AM on the broadcast dial for years, often-times hearing the phrase "Give em' a break!" The old IDOT broadcast station gives real-time travel times and highway conditions for the highways that run into and through Chicago. 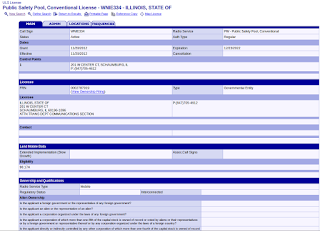 Other key information from their website gives this information: "The National Work Zone Safety Information Clearinghouse is the nation’s first and most comprehensive information resource on roadway construction zone safety."

"After months of consultation with experts in the traffic safety field on how such a Clearinghouse should be established and what it should contain, FHWA sought proposals for the project in a national competition. ARTBA was selected as the project manager in the fall of 1997.

In partnership with the Texas A&M Transportation Institute (TTI), and with financial support from FHWA, the facility opened for business on February 17, 1998.

Ever since, the Clearinghouse has provided transportation agencies, highway engineers and contractors, labor unions, insurance companies, motor clubs, news media and other interested parties with a wealth of information on how to make road construction zones safer for motorists, pedestrians and highway workers.

In 2000, Clearinghouse operations were privatized and managed by the ARTBA Transportation Development Foundation (TDF), with support from the American Association of State Highway & Transportation Officials, TTI, labor organizations and other safety groups. TTI manages the day-to-day operations, conducts the safety research and maintains the Clearinghouse website." 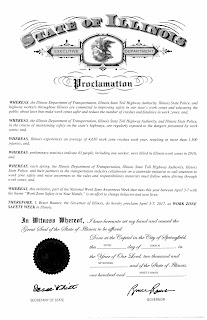 “We definitely want to get people in the mindset of slowing down, getting off their phones, and being careful when they’re driving through work zones. And, this is just one way to spread awareness about it,” said IDOT Spokesperson Brian Williamson in a comment to WBMD radio in Peoria, Illinois.

“It’s something that we can do together. On our part, we try make work zones as safe as possible, both for the motoring public and for our workers. We just ask that drivers try to do the same thing.”

WGN's Sarah Jindra, NBC's Kye Martin, ABC's Roz Varon, and others wore orange on photos displayed on their twitter accounts which were then re-tweeted by IDOT District-1.

Yesterday at 10AM, IDOT hosted their National Work Zone Awareness Week kick-off event with Tollway and State Police, per a State Press Release. 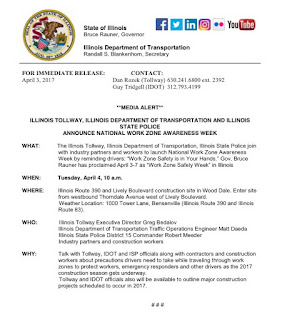 IDOT released this Roadway Worker statistics graphic to help inform the public about the risks faced by workers. 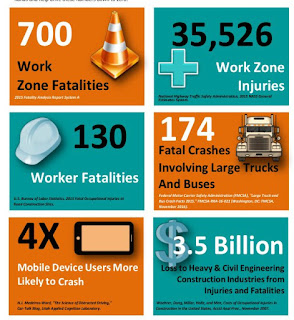 Next time you see road workers, as the old IDOT broadcast station on 530AM says, "Give em' a break, slow down!" 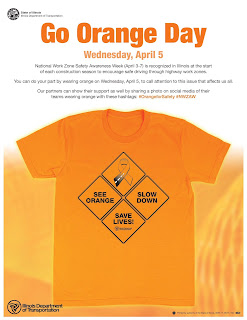 Chicago-One News spoke briefly with IDOT Public information Officer, Gianna Urgo, who was hesitant to speak, and referred Chicago-One News only to the IDOT Twitter accounts after making an offer to answer questions about Workzone Safety Day, then only saying that it is a "national event, we didn't make it up".

Dear Ms. Urgo, please be advised that there ARE smaller news outlets in existence, and the multi-billion dollar corporate media aren't the ONLY media you can, or will ever speak to. Please practice your public relations skills.
Posted by Chicago-One News at 5:39 PM