ABC 7 Chicago recently reported that a $1-BILLION Dollar project to modernize the area immediately surrounding Chicago's Union Station, including some new work to Union Station itself is planned. According to this report, "The master concept includes a few office towers across the street and a proposed food hall along Clinton Street. The proposal also includes a residential tower that will be built above the head house at Union Station. There is also a plan for a public green space on the roof level."

"The initial design, proposed by Riverside Investment and Development Company, would create about 3.1 million square-feet of new commercial space near the station."

The Amtrak CEO, one Mr. Charles Moorman is said to be working with Rahm Emanuel, Mayor of Chicago, to "develop the commercial sections of Union Station and the neighboring, Amtrak-owned properties. They predict it will take six years to complete." The new project will allegedly create some 8,000 permanent jobs. Artist concept graphics were released recently courtesy of ABC 7 Chicago. 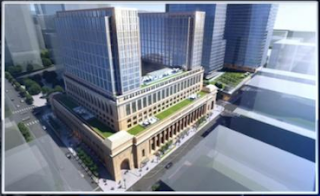 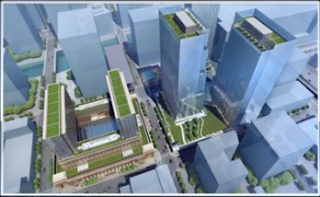 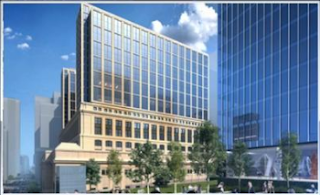 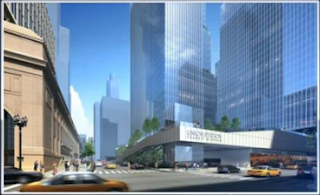 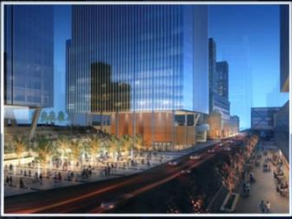 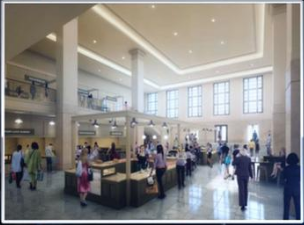 However, as exciting as this project may sound, there are dangers. The United States EPA has measured air quality in and around Chicago Union Station. The EPA testing focused on something called PM2.5. particulate matter that is 2.5 micrometers (µm) in diameter and smaller. PM2.5 is sometimes referred to as fine particulate matter, a complex mixture of extremely small particles and liquid droplets. Particle pollution is made up of a number of components, including acids (such as nitrates and sulfates), organic chemicals, metals, and soil or dust particles. The size of particles is directly linked to their potential for causing health problems. EPA is concerned about particles that are 2.5 µm in diameter or smaller because those are the particles that generally pass through the throat and nose and enter the lungs. Once inhaled, these particles may affect the heart and lungs and cause serious health effects. The particulate matter measured in this survey is primarily from diesel exhaust. In addition to contributing to particulate matter, diesel exhaust contains many other harmful pollutants, including carbon monoxide, benzene, formaldehyde, and nitrogen oxides.

The above information comes directly from the EPA study on Chicago Union Station air quality.

According to the EPA, Union Station isn't the only concern. They say "There are several buildings with ventilation systems that impact air quality at Union Station." A particularly telling, and very concerning question and answer at the EPA site for this study:

Research done by Chicago-One led to several trusted sources that, when put together and taken altogether, spell out a long and arduous history at Chicago Union Station on the topic of air quality and connected safety issues as spelled out by the above statement from the EPA.

The first source is Kari Lydersen, a reporter for the Chicago Reporter. Kari wrote a headline, "Tests Reveal Unsafe Air at Union Station" Kari's work here dates back to January 1st, 2010. Lydersen first gives a rather grim picture of great personal risk taken by employees and passengers alike, "inside Union Station, on the platform and even inside the train, people are exposed to particulate matter at levels far exceeding what the U.S. Environmental Protection Agency considers safe, according to testing done by the Clean Air Task Force commissioned by Respiratory Health Association of Metropolitan Chicago last year."

The Chicago Tribune says they performed their own investigation of the air quality at Chicago Union Station in 2010 as well. The Chicago Tribune said they tested "for black carbon, an indicator of soot, while the EPA tested for particulate matter. Both methods measure diesel exhaust, but making direct comparisons is difficult. Agency officials said they focused on the open-air Union Station platforms — rather than inside train cars or the station itself — because the agency has the clearest authority under the federal Clean Air Act to address outdoor air pollution." Source article here

Bill Davies, a British developer who bought the vacant main post office building in 2009, was under a federal court order to maintain a massive ventilation system that sucks diesel fumes from Union Station tunnels at the time of the 2010 Chicago Tribune report.

Fast forward four years to 2014, and the problem doesn't get any better. "Chicago CBS 2 Investigators found train ventilation systems covered in filth. Vent after vent, train after train, walls and ceilings dirtied by the air blowing into the cabins. With IIT, CBS 2 conducted field-testing using special monitors to detect levels of dangerously small or ultrafine particles that can penetrate deep in the lungs and cause health problems.

CBS 2 obtained a full response from the EPA at that time. Here is the full U.S. EPA Region 5 Response:

“Currently, the U.S. Environmental Protection Agency is funding and conducting ongoing research into the potential health effects of exposure to microscopic, ultrafine particles and nanoparticles. More research is needed before the Agency can establish national ambient air quality standards for such particles.

EPA is making progress toward reducing harmful air pollution from train engines. New EPA engine standards effective in 2012 reduce particle pollution, as well as the emissions of hydrocarbons and gaseous pollutants. Beginning in 2015, new train engines will be subject to even stricter requirements. As rail systems nation-wide replace their engines over the years, they are bringing in cleaner equipment that will improve both indoor and outdoor air quality. 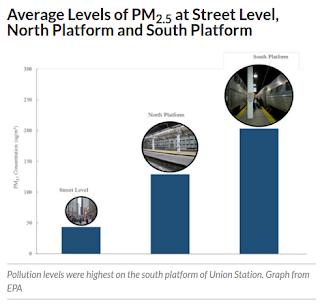 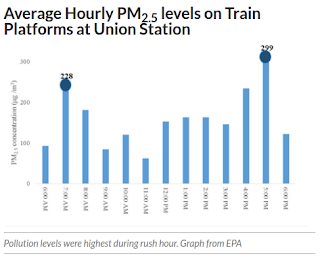 “The ventilation is an important issue and it’s going to be addressed through an ongoing process through the city’s master plan. We are working with the city on the Canal Street [ventilation system] that covers all the tracks,” he said."

"Metra echoed this focus in a statement: “[We] are pleased to partner with the city of Chicago and the CTA on a long-term solution to address the air quality issues which could be solved through the master plan to reconfigure and redevelop Union Station.”

"Mooney said it isn’t clear whether progress has actually been made as another air quality study has not been performed."

On December 27th, 2016, the Chicago Tribune wrote again on this matter, and said that "Illinois will collect nearly $98 million for anti-pollution projects from a federal legal settlement with Volkswagen, the German automaker that installed secret software in nearly a half-million diesel vehicles to make them appear cleaner than they actually were. The agreement stipulates the money must be used to reduce lung- and heart-damaging nitrogen oxides emitted by diesel trains, buses, ferries and equipment."

In that same piece, the Chicago Tribune said that "Metra is still reliant on locomotives built in the 1970s that are significantly dirtier than newer models. Metra responded by upgrading its passenger cars to filter out diesel soot. But its decades-old locomotives still emit high levels of pollution that form acrid blue clouds inside Chicago's busiest commuter station." - Source article here

"The EPA considers diesel exhaust one of the most dangerous types of air pollution. Breathing even small amounts can inflame the lungs and trigger asthma attacks, researchers have found. Several studies have linked exposure with heart attacks, cancer and premature death." - Chicago Tribune

This brings us into the current day. On January 12th, 2017, just close to 6 months ago, the City of Chicago announced this:


In that announcement, the City of Chicago laid out these points:

The Union Station Redevelopment plans envision a public-private partnership to

implement both transportation-related improvements as well as transit-oriented developments surrounding the station. The three main goals are:

1. To expand and renovate the station to be an architecturally significant transportation terminal that both preserves and builds upon its existing architectural heritage.

2. To allow a growing number of passengers and other visitors to use the station facilities in the most efficient, safe, and pleasant manner possible.

3. To create a vibrant commercial center and civic asset that welcomes and serves travelers, neighborhood residents, and downtown workers alike, while further enhancing the economic vitality of the City of Chicago and the region.

Among the improvements that could be funded under the agreement are the following:

* Rehabilitation of the Great Hall skylight and dome structure.

* Renovation and expansion of the Adams Street and Jackson Street entrances.

* Expansion of the Union Station Concourse.

* Improvement of ADA accessibility throughout the station, including installation of an elevator at the Canal Street Headhouse.

* Reconstruction of the Canal Street and Harrison Street viaducts.

* Transit-oriented development, including commercial/residential development of the air rights over the Headhouse and commercial/office/retail uses surrounding Union Station.

This brings us to where we are today. There is currently no word on how developers plan on keeping Union Station residents safe from the dangers mention in this article.
Posted by Chicago-One News at 4:02 PM