Chicago - One News has this exclusive story involving an accused repeat offender, and how he was given opportunity and access to victims.

The residents of the State of Illinois, County of Cook, and the City of Chicago were terrorised from August 22nd, 2016, to July 3rd, 2017 by a man who was accused of very serious violent crimes because the Cook County State's Attorney headed by Kim Foxx,the Cook County Circuit Court, and the Illinois Legislature saw to it that he went free THREE TIMES!

Chicago - One stumbled across this case at the popular CWB Chicago website. Walters' first arrest took place on August 22nd, 2017. 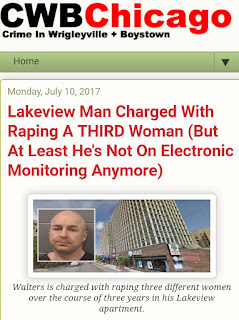 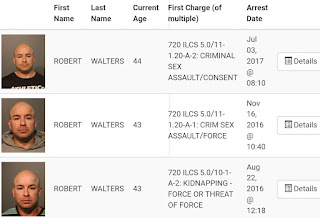 According to CWB Chicago, "The new charge came after a 27-year-old woman identified Walters in a photo array as the man who brought her to his residence against her will and sexually assaulted her by force on July 16 last year, prosecutors said.

At the time, Walters was already under investigation for two other rape allegations that police said were “of a similar nature.”
One month after last July's attack, Walters was charged with raping an intoxicated 21-year-old woman that he picked up outside the old Castle Nightclub at 632 North Dearborn in 2013.

A DNA sample from that attack had finally been tested and pointed to Walters, prosecutors said.

Walters was initially held on $5 million bail, but Judge Carol M. Howard would later cut that to $200,000. When Walters showed up in court for his second rape case, Judge Maria Kuriakos Ciesil set bail at just $75,000. Walters went free on electronic monitoring."

In his August 2016 arrest, Investigators learned through a check of the DNA database that there was a strong association between Robert Walters’ DNA and the DNA that was found on the victim, Cook County prosecutors said. That arrest took place THREE YEARS after Walters' victim in that case stepped forward.

In that August 2016 arrest, court documents show that Walters then asked the woman for her cellphone. When she gave it to him, he plugged his number in and called his number from her mobile, then later texted her to explain how she obtained her injuries which consisted of a lacerated knee that required stitches, and a sprained ankle.

On November 15th, 2016, Walters was in court before Judge Maria Kuriakos for bond in his second case. The details of the second case Walters is accused in state that he used a dating site, called, "OK Cupid". Walters and his victim met after they first made contact on the site in December of 2014. The two met on December 23rd, 2014, at or around 8:30PM in a Wrigleyville bar.

After Walters' DNA was collected in this second case, the DNA was shown to match the DNA in the first case. Walters had posted bond ($20,000 — or 10 percent of the bail amount in the first case) and was free on electronic monitoring when he was arrested for the OkCupid rape.

This means Walters has been accused of committing Aggravated Criminal Sexual Assaults since at least 2013. At this time, there is no word of any other victims other than the victims in these three cases. Illinois law currently allows judges to set bond / bail in sexual assault / aggravated criminal sexual assault cases, and impose electronic monitoring, giving some rapists a free pass to continue victimizing.

Illinois currently does not have age gap laws pertaining to adult relationships. Illinois age gap laws that regulate romantic and sexual relationships are only intended to protect children from older peers, and to protect them from adults. Illinois law currently does not bar accused persons in violent cases from accessing the internet, nor does it bar them from using electronic communications devices or landline phones which can be used to access telephone chat lines currently still in operation.

Illinois law currently also does not require dating sites or other adult forums to perform checks on its users, nor are users mandated to inform users of their current court status when involved with any kind of violent criminal accusations.
Posted by Chicago-One News at 3:43 PM