Chicago-One News brought you the story of Chicago's recent shooting in Chinatown, and now police say they've charged a suspect. Jeremiah Holt, 20, of Chicago has been charged with first degree murder, armed robbery, attempted murder and aggravated battery with a firearm, according to Illinois State Police. This was not the first time Holt was involved in a crime with a weapon he wasn't allowed to have, neither was this his first such offense involving a motor vehicle.


Jeremiah Holt has an adult arrest history with the Chicago Police Department that starts back on September 04th, 2016. That first arrest saw Holt charged with retail theft, less than $300.00, and he was given a 1,500.00 D Bond. 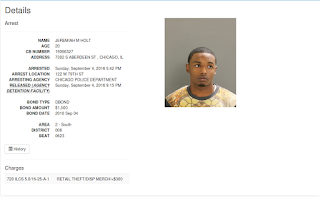 Holt's second arrest in November of 2016 saw him charged with a litany of crimes. Those charges were: UUW - Weapon - Possess / Carry / Conceal Weapon, Criminal Trespass to Vehicles, No Turn Signals Violation, Driving on a Suspended License, and Insurance - Operate Motor Vehicle Without.

According to the arrest record for the November 2016 arrest, he was released two days later after being arrested, but there is no indicator about any bond or bail posted for his release. A search of the Cook County Sheriff's Department Inmate Locator shows that Holt was last due in court for the 2016 UUW charge in January of 2017, and that he was given a $50,000 bond. This new arrest for the Dan Ryan Expressway shooting in Chinatown violates that bond. 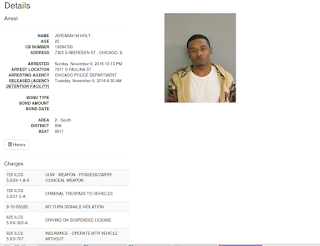 Here is the Chicago Police Department Zone13 Radio Audio of the events that took place on April 19th, 2017 when Holt allegedly shot and killed one person, wounded another, and then caused a traffic collision that injured two Chicago Police Officers and two civilians.

During this audio recording, you'll hear police say they have a "positive I.D." and then comes the call for the auto collision at 31st & Shields involving the injured Chicago Police Officers. In THAT crash, one officer was in critical condition and at the time, unable to feel his legs. This fact was relayed to the dispatcher by the unit calling the emergency. After this is established, an officer at the scene says there is another vehicle with "unknown number of occupants and unknown injuries"

WGN-TV, Skycam 9 Reporter, Sarah Jindra, took this photo from above the scene as police worked to investigate and successfully close the case.

Later in the evening, Chicago Police and State Police remained on the scene searching for any other evidence, including shell casings from the shooting as documented by Twitter user @MorsOntologica 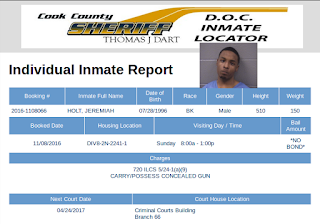 Holt is due back in court today, April 24th, 2017, as indicated by his individual inmate report.

Jeremy Scullark had been dropping off a friend at the nearby CTA Red Line station and was then on his way home, according to information from his family provided to NBC Chicago. In that NBC piece, the family says he was attending college, and planning to marry his girlfriend later this year. They said he was a person who loved life.

Family members set up a GoFundMe page to help with funeral expenses, and raised $11,330.00 for his final services. The GoFundMe campaign is now closed.

There is currently no public information available about services for Mr. Scullark.
Posted by Chicago-One News at 12:05 PM No comments: