The mass attack at Chicago's Mercy Hospital was the first mass attack on a major hospital and its staff within the city of Chicago since July 13, 1966, when Richard Speck broke into 2319 E. 100th St, and committed mass murder, killing eight nurses. This mass attack has extra significance due to the background of the attacker, now identified as Juan Lopez. Lopez killed three victims, identified as his ex-fiance, Dr. Tamara O'Neal, M.D., an Emergency Medicine Doctor employed at Mercy; Pharmacist Dayna Less, Pharm.d.; and Chicago Police Officer Samuel Jimenez.

The following analysis, report, and public records reference is created for the public at large, which would also include news media, researchers, historians, psychiatric and psychological professionals, and others who may find access to this information critical to answering questions in the decades to come.

25/Michigan: CPD notified by victim via 911l of a person w/ a gun. she didn't see the gun, however, male offender threatened to shoot her and himself.

6:04PM - CPD calls Forensic Services for an Evidence Tech for the wounded officer, and a call for flood lights one minute later

3:24PM - Ambulance 41 and Engine 8 dispatched for the person Shot at 2520 S Prairie in the parking lot of Mercy Hospital

The offender in this case possessed a valid Illinois FOID and a valid Illinois CCW License, and had purchased  was a Chicago Fire Department Firefighter/EMT Candidate in March of 2014. Chicago-One has obtained a FOIA copy of Lopez's Personnel Record, and Lopez's CFD Internal Affairs Investigation Record, which speaks of erratic, and abusive behavior/ Those records are provided here for full context. Fire Department spokesman Larry Langford said after the department launched disciplinary proceedings, Lopez went absent without leave. Officials tried to contact him, but he never responded, so he was fired in May 2014 for going AWOL 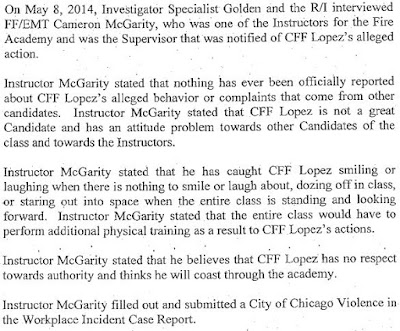 Was Lopez a sociopath, and a master manipulator as part of undiagnosed sociopathy, or was he just a person who knowingly made bad decisions and then tried to walk them back by making it appear as if he were sorry for his actions? This next piece of the CFD Internal Affairs Investigation is key

Next, this snippet gives even more insight into Lopez, and how his mind worked 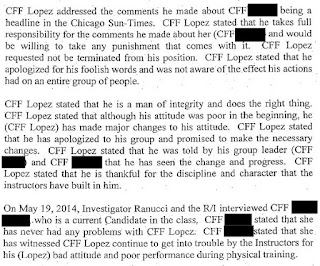 Four years ago, a woman complained that the Mercy Hospital mass shooting offender was texting her "incessantly" and she sought an order of protection against him, though it is unknown if that order had been granted.

At the end of 2014, Lopez’s wife at the time, applied for, and was granted an order of protection against him, claiming she feared for her safety, because he had started sleeping with a gun, and leaving it accessible to their child. She also accused him of pulling a gun on a realtor during an apartment appraisal, and going after a neighbor with a gun.
His wife at the time filed for divorce months later.

The ABC 7 I-Team is quoted as follows:

"Why was Lopez allowed to have state permits, and that gun, when he was involved in several red flag events that apparently should have called his authorization into question?

On Wednesday, November 21st, 2018, state police spokesman Matt Boerwinkle told the I-Team that Illinois investigators were reviewing the chain of communication in recent years following abusive behavior that Lopez was involved in. State police are trying to determine who knew what and when, and was that information about Lopez transmitted to the licensing and regulatory staffers who needed to know it?

While the order of Protection was valid, the court checked a box stating, "should be ordered to surrender any and all firearms to the local law enforcement agency."

While state police investigators attempt to piece together the circumstances surrounding Lopez' licensing, it may be that he escaped disqualification because no criminal charges were filed in connection with the incidents. It is not clear whether state officials knew about any of the threatening behavior until Lopez's burst of violence at Mercy Hospital

Investigators from the U.S. Bureau of Alcohol, Tobacco, Firearms and Explosives provided Chicago police with the gun trace information. CPD spokesman Anthony Guglielmi said that Lopez bought the pistol used at Mercy Hospital and at least three other guns in the past five years.."

Lopez worked for the Chicago Housing Authority since February of 2018 as an associate program specialist for the customer care center at CHA headquarters., and was attending graduate school at DePaul University, majoring in policy.

CHA officials said he passed a background check, and had no history of complaints while he worked for the agency.

ATF - Record Responsive to FOIA, but not available due to ongoing investigation

FBI - Records Responsive to FOIA, but not available due to ongoing investigation

These agencies may share records with, obtain records from, or even create new records within other federal agencies as part of the investigations and communications processes. Other federal agencies who have interest in mass attacks may create their own files. Records may be available from DHS, U.S. State Department Bureau of Intelligence and Research, CIA Directorate of Operations, and ODNI (NCPC). 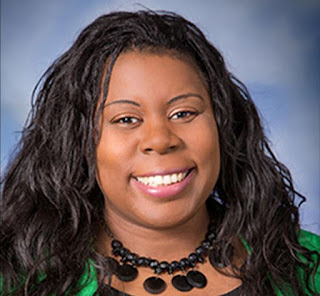 Doctor Tamara O'Neal
Visitation for O’Neal was held Friday, November 30, at Haverstock Funeral Home, 602 Maple Ave., LaPorte, Indiana.and her funeral was Saturday, December 1st at First Church of God, 2020 E. Lincolnway, LaPorte. where there was a second visitation at 10 a.m. prior to the funeral. O’Neal was buried at Pine Lake Cemetery, 1367 Pine Lake Rd., LaPorte. 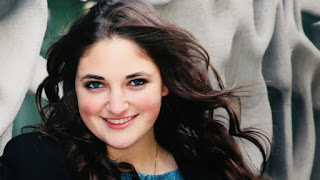 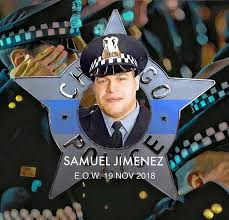 The visitation for Officer Jimenez was held at Oehler Funeral Home, and his funeral at the Chapel of Saint Joseph at the Shrine of Our Lady of Guadalupe,1170 N. River Rd., Des Plaines. Burial was at Ridgewood Memorial Park.

All three victims of the November 19th, 2018, mass attack at Mercy Hospital are remembered as caring, loving, beautiful, kind, intelligent and valuable members of their communities who gave much, and whose lives held meaning beyond words.CPD Officer Samuel Jimenez was a new officer who had just completed his new officer probation, and did what he always dreamed of doing. Officer Jimenez gave his life in pursuit of the safety of the lives of Dr's O'Neal and Less, Less was a Doctor of Pharmacy. Dr O'Neal was an emergency medicine doctor.

Posted by Chicago-One News at 2:02 PM