Dysfunction and Disorganization at The Chicago Police FOIA Unit 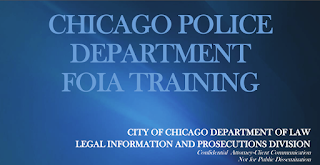 Chicago-One has filed MANY Freedom of Information Act requests to bring the public news and information directly from within the crime and mayhem we know too well in Chicago. The FOIA Officers at the Chicago Police Department are truly some of the best people around, and the team at CPD FOIA is made of a mix of civilians and sworn personnel.

Chicago-One has some tidbits of information from within the CPD FOIA Unit that the public should know about. There are really serious issues in the CPD FOIA unit, starting with the fact that a City of Chicago FOIA Officer who spoke on condition of anonymity has told Chicago-One that the unit is operating under extreme stress. The word extreme is by no means an exaggeration, according to the anonymous source at the FOIA Unit.

According to the confidential source at CPD FOIA, there is an ever-increasing workload, the unit is short of staff, and funding is an issue. The public is paying the price. FOIA requests are being delayed, some not even being answered at all. 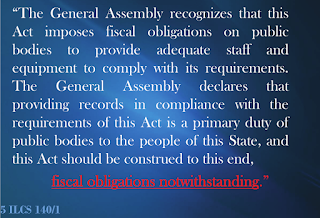 Chicago-One asked to see the process that occurs at the unit from the time a request is received, to the time it's assigned, to the time the final response goes out. The anonymous source said that the Chicago Police FOIA Unit DOES NOT have any formal process, because, according to the source, there is no training manual. There is also no written manual at CPD for processing FOIA requests up or down the chain of command.

However, Chicago-One was able to locate CPD Special Order S09-03-05 and CPD FOIA# P454308 filed by Emma Best over at Muckrock. That request by her saw the release of a CPD FOIA Training Powerpoint Presentation, and twenty-six page FOIA Guide For Law Enforcement.


None of these materials actually detail the processing of CPD FOIA requests from one step to the next, one hand to the next set of hands, one reviewer to another. What IS known is that at some point in the process, the request for either a FOIA Denial, a FOIA Extension, or a No Responsive Records Letter is sent to the City of Chicago Corporation Counsel's Office where the letter is generated and checked-over for proper legal wording, etc, and then sent to CPD FOIA for final response to the requester. These facts, coupled with the results of Emma Best's FOIA at CPD means that the anonymous source singing to Chicago-One is correct.

The FOIA Unit responded to Chicago-One On Wednesday, April 3rd in a FOIA that was filed in early January, and in which the city sent an extension, but violated the extension. Next, the file sent was FULL of improper and illegal redactions in which the city used Illinois FOIA exemptions illegally hundreds of times throughout the 126 page responsive file.

The Attorney General or the PAC has determined that disclosure of the following information is not a clearly unwarranted invasion of personal privacy, and therefore a public body may not withhold (redact) the information under section 7(1)(c):

Laverty's Final Grade Report from his CPD Recruit Training was also totally redacted, except for the top section


These aren't the only FOIA violations Chicago-One is in possession of. The recent murder of Chicago gang leader "Big Law" Loggins brought about a violation when Chicago Police redacted the mugshot of Loggins from his CPD Rap Sheet, also redacting his CPD record identifiers and date of birth, even though the state statute doesn't apply since he isn't alive


Under Illinois FOIA Law, hospitals are NOT "unique identifiers" and yet, CPD FOIA and City Corporation Counsel redacted the names of hospitals to be used during the Lake Shore Drive / Wrigley protest march in the CPIC (Fusion Center) intelligence plan 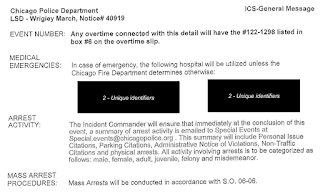 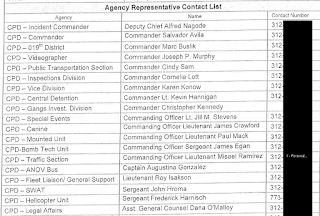 The Capitol Fax has this part of the story.

"The BGA is quoted as saying Out of the top 5 public bodies that initially failed to respond to [FOIA] requests — and only responded after the PAC intervened — the Chicago Police Department ranked the highest with 672 requests that it did not respond to during this period. Additionally, there were 6 instances in which the Chicago Police Department did not respond even after PAC intervention during the time period we studied. In fact, the PAC issued a binding opinion as recently as December 31, 2018, based on CPD’s failure to respond to a request even after the PAC intervened. Based on a FOIA request we submitted to CPD recently, it does not appear that anyone at CPD was ever disciplined for these violations."

Laura S. Harter, Deputy Bureau Chief, Public Access Bureau, has sent the Chicago Police Department a second letter in a FOIA violation case that was filed on February 9th, 2019, and the first PAC letter to CPD in the matter was March 1st, 2019. Chicago Police has still not complied with the PAC as of this date.
Posted by Chicago-One News at 12:55 AM