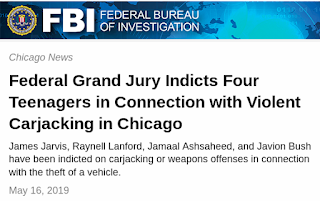 CHICAGO — A federal grand jury has indicted four teenagers on carjacking or weapons offenses in connection with the theft of a vehicle at gunpoint in Chicago’s Edgewater neighborhood, the U.S. Department of Justice has announced today.

JAMAR JARVIS, 18, RAYNELL LANFORD, 19, and JAMAAL ASHSAHEED, 19, all of Chicago, forcibly took a Lexus sport-utility vehicle from a victim early in the morning of Oct. 18, 2018, according to an indictment returned Tuesday in U.S. District Court in Chicago.  The fourth defendant, JAVION BUSH, 19, of Chicago, provided assistance to the others after the carjacking, the indictment states.

Chicago Police have no arrest information up for Jarvis, but they do for Lanford. 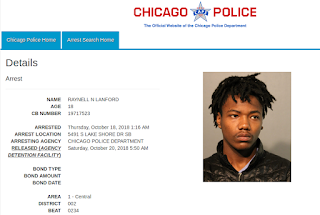 These were the original state charges before the feds charged him.

As forAshsaheed, Chicago Police never posted his arrest for this carjacking charge, but, they DO have something of a history for him for other crimes

Javion Bush's arrest WAS posted by Chicago Police, and for the first time, the public now also gets a look at him. 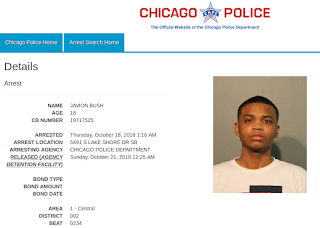 The original state charges for Bush prior to federal arrest and charging read as follows:

All four defendants are currently in law enforcement custody.  Arraignments in federal court in Chicago have not yet been scheduled.

After taking the Lexus, Jarvis, Lanford and Ashsaheed drove it to a gas station in the South Loop neighborhood of Chicago, where they purchased gas and a gas can, the indictment states.  CPD officers later arrested the trio, as well as Bush.
The indictment charges Jarvis, Lanford and Ashsaheed with conspiring to commit carjacking.  The three are also charged with using, carrying and brandishing a firearm during a crime of violence. Bush is charged with being an accessory after-the-fact to the carjacking.

The public is reminded that an indictment is not evidence of guilt.  The defendants are presumed innocent and entitled to a fair trial at which the government has the burden of proving guilt beyond a reasonable doubt.  If convicted, the Court must impose reasonable sentences under federal statutes and the advisory U.S. Sentencing Guidelines.

Posted by Chicago-One News at 3:04 PM