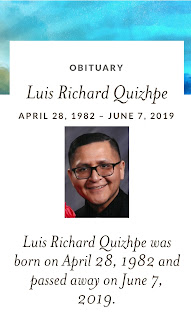 The Chicago Police Department has confirmed the passing of 37 year-old Luis Richard Quizhpe in a statement released this morning. The statement reads that on June 7th, 2019, at approximately 6PM, officers responded to the call of a death investigation in the apartment on the 2200 block of N. Western Ave Upon arrival, an on-scene witness related to officers that a 37 year-old male victim had passed away. The victim was unresponsive, and pronounced on-scene. Area North Detectives are investigating.

A check of the Cook County Medical Examiner's Case Archive reveals that they assigned a case number to a 37 year-old male on June 7th, 2019, and that the exact address of death was 2242 N. Western Ave in Unit 3. The same record archive does not yet list a cause or manner of death. A public Facebook post by the sister, Luisa Quizhpe, confirmed the death, as does a public obituary at Dignity Memorial. Dignity memorial lists a wake for Luis Richard Quizhpe at Montclaire-Luciana Funeral Home on June 12th, 2019 from 3PM to 8PM, with a Celebration of Life Service the next day from 9AM to 10AM. No final internment is listed.

Luis Richard Quizhpe was the son of Luis Quizhpe, a Chicago retailer who successfully and quite literally brought a baseball bat to a gun fight and won when two offenders illegally armed with handguns entered the small gift shop at 2242 N. Western and attempted to rob Quizhpe's brother and Mr. Luis Quizhpe himself. Shots were fired, and Quizhpe was hit, but survived to tell his story. The robbery occurred on April 11th, 2013 at 4:30PM

The robbery, and Quizhpe's display of bravery against two armed robbery offenders made international news.

Luis Richard Quizhpe leaves behind a brother, a sister, his mother and father, as well as one child and a spouse.
Posted by Chicago-One News at 11:12 AM