The only intelligence on the policy comes from the head of Chicago Public Schools head of safety and security, Jadine Chou, who said there were "improvements between 2012-13 and 2017-18, when there were 77% drops in expulsions and out-of-school suspensions of African-American boys and a 43% reduction in incidents involving African-Americans where CPD was called." Chou further said "police officers should only be involved in a school incident when a crime has been committed, or when there’s a serious or imminent threat, usually involving a weapon"

The second piece of intelligence in this new policy development also comes from Jadine Chou. Chou told the Sun-Times that 72 local school councils, all of which have Chicago Police stationed in their schools, voted to keep police stationed at the schools versus the option of getting rid of police altogether and only relying on 911 calls as needed. Chou also acknowledged to the Sun-Times that the process of getting police involved "moves too fast".

The Sun-Times piece goes on to mention talk about looking into safety and security alternatives to having police in schools, something that Chou said the Chicago Public Schools had provided information on at the meetings in the context of alternatives to "SROs" (school resource officers) as well as procedures to remove officers if / when needed.

The Chicago Police Department has policies in place that spell-out how their sworn Officers and Detectives must deal with juvenile matters. Three years ago, CPD Special Order S06-04-06 was created. That special order was originally dated as effective on 01 August 2016. The title of that order is "Juvenile Intervention and Support Center".That special order was updated last on 22 September 2017, and effective three days later on 25 September 2017.

The text of the order is seven pages long, and page one is structured as follows: Purpose, Policy, and General Information. The policy section reads as follows....

Under the General Information section of the same special order, there is a very specific Juvenile Intervention and Support Center boundary wherein the "JISC" is situated. All of the Chicago Police Districts that make up the JISC fall largely into the Area Central Bureau of Patrol, and Area Central Detective Division, with only two of the districts falling into Area North's Bureau of Patrol and Detective Division. 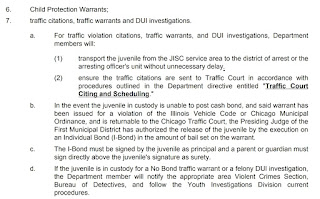 The seven page special order has a General Information section that spans about two and a half pages long before moving on to Section IV (Section 4). This specific special order has a total of 12 policy sections. The most important of these is section VIII (Section 8), titled "JISC Processing Detective Responsibilities"

The Chicago Police Department policy parents of juveniles living in Chicago and whose juveniles attend Chicago Public Schools should know about is CPD Special Order S06-004, "Processung of Juveniles and Minors Under Department Control". This special order is the main policy Chicago Police follow when they have anyone under the age of 18 in their custody. This policy is double the length of the JISC policy at 15 pages long, and consists of 18 policy sections with an "addenda" at the end.