This is a BWC event. Event# 11886 - Reporting officers were dispatched via Zone 1 radio to the above address where they discovered 5 people shot. The offender was described as a male of Polish nationality with grey hair and light grey jacket. Zone 1 informed R/O's that the offender was walking up and down the gangway of the address.

A description of a male white with a light blue jacket and black jeans was also given. Investigation revealed this to be the correct description.

R/O's arrived to find a mass murder had occurred at the above address. All 5 victims are deceased. 4 were deceased on-scene, and the fifth victim deceased at Lutheran General Hospital in Park Ridge, Illinois.

During initial investigation, 016th District units made contact with a person of interest who directed officers to what is believed to be the murder weapon. The weapon was recovered, and the person of interest who was a match to the physical description given to responding officers was taken into custody, and transported to Area North Detective HQ.

Reporting Detectives identified the offender as a 67 year-old male, retired from construction work, wearing a light blue jacket and black jeans. Beat 1631 took the offender into custody on-scene, and the weapon was recovered in the offender's apartment, number 2C.

Reporting Detectives investigation revealed that at or around 5:30PM, the offender entered an apartment at the above address and proceeded to display a handgun, fired shots at a family sitting at their dinner table, striking all victims fatally. The offender then fled from the scene. After fleeing scene number 1, the offender then encountered a female outside apartment 3C on the third floor of the building, brandished the same handgun, and fired shots, striking the victim. This victim was transported to Lutheran General Hospital in Park Ridge, Illinois. This victim was noted as being in critical condition and taken by LGH staff to emergency surgery. This victim has since been pronounced dead.

Crime scene #2 was determined to be apartment unit 3C.

Reporting Detectives investigation revealed in essence, but not verbatim, that the offender was known to all five victims, and had a history of anger issues. Neighbors told reporting Detectives that he (the alleged offender) would give them weird looks, shoulder check them, and get into verbal fights. At this time, it is unclear if this offender had more violent interactions, and how he obtained the gun used.

Beat 1622 later became the paper car for this event

The Chicago Fire Department implemented an EMS Plan-1 for this event. OEMC Police Dispatch also implemented a plan for CPD.


The Cook County Medical Examiner spokesperson made the following statement to Chicago-One News regarding the identity of the victims:

Chicago Police News Affairs Officer Michelle Tannehill told Chicago-One News on Sunday, 13 October, 2019, that charges are pending in this case and the identity was not immediately released to Chicago-One News.

On Monday, 14 October, 2019, Chicago Police Spokesman Anthony Guglielmi released a photo of the offender in this case. Charged in these murders is 66 year-old Krysztof Marek. Marek is due in bond court on 14 October 2019.

Marek is formally charged with 5 counts of 1st Degree Murder. Marek was held without bond by Judge John Fitzgerald Lyke, who called his acts "evil on steroids". Bond Court notes published by Megan Crepeau of the Chicago Teibune, read as follows: 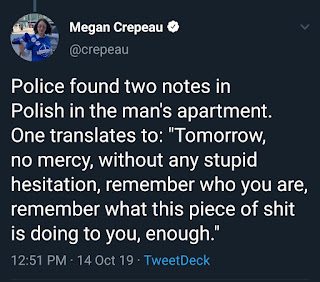 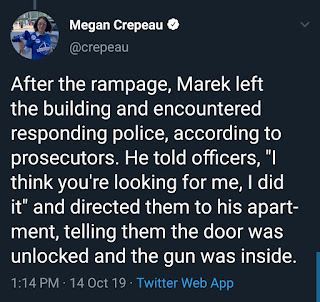 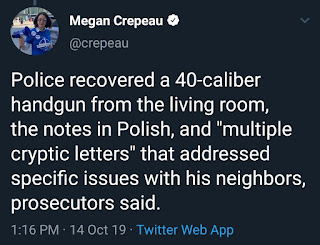 Posted by Chicago-One News at 9:06 PM