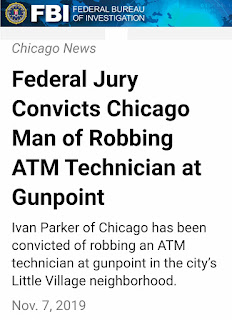 The U.S. Department of Justice and the FBI made the announcement today that Ivan Parker has been convicted in federal court by a jury of his peers.

The announcement made by the U.S. DOJ said the complaint read as follows:

"On July 27, 2018, IVAN PARKER pointed a handgun to the technician’s head in the vestibule of a Chase Bank branch in the 3800 block of West 26th Street.  The robbery occurred shortly before 7:00 a.m. as the technician was loading an ATM with cash.  The technician tried to push away the gun and a struggle ensued.  Parker used pepper spray on the technician before grabbing a bag containing $106,335 in cash and running from the scene."

This offender was arrested in August of 2018 and was held in custody since then.

The announcement goes on to say, "The jury in federal court in Chicago on Wednesday convicted Parker of the single robbery count against him.  The charge is punishable by up to 20 years in prison.  U.S. District Judge Sara L. Ellis set sentencing for May 27, 2020.
The conviction was announced by John R. Lausch, Jr., United States Attorney for the Northern District of Illinois; and Emmerson Buie, Jr., Special Agent-in-Charge of the Chicago office of the FBI.  The government is represented by Assistant U.S. Attorneys Tobara S. Richardson and Christine M. O’Neill."

The announcement, dated for November 7th, 2019, wasn't announced by the FBI Media Affairs Office until today

Posted by Chicago-One News at 3:56 PM