Woman Stabbed to Death by Boyfriend on Chicago's Northwest Side

R/O's responded to an OEMC radio notification of a stabbing at the above address. R/O's arrived o/s to find a male who opened the rear door for R/O's with blood all over his sweater. R/O's immediately summoned CFD ambulance via Zone-12 for the offender.

Offender was immediately taken into custody in the rear bottom level stairwell of the address. Units proceeded upstairs and discovered a lot of blood, indicating a crime scene. Units then discovered a 29 year-old female victim lying on the floor with stab wounds to the neck, and a second ambulance was ordered.

Ambulance was told to enter through the rear of the address. 2545R recovered the suspected weapon, and secured suspected weapon. Crime scene was contained to the upstairs unit.

The offender called 911 and admitted killing the female victim with a knife 40 minutes prior to him calling 911. The offender spoke only Spanish, requiring a translator, and was still on the phone with the OEMC call taker upon arrival of units. 2551 gave a slow-down, followed by a disregard due to having enough units on-scene to investigate.

News Affairs Officer Kellie Bartoli stated that the background of this incident shows it to be a domestic violence related case, and that the offender is a 34 year-old male who was determined to be the victim's boyfriend.

Chicago Police sent the full Incident Case Report and Arrest Report on 12 November 2019, which identifies the victim and the offender. The Cook County State's Attorney's Office confirmed the murder charge, and said that the offender named in the CPD paperwork was held without bond in a bail hearing on 08 Novermer before Cook County Circuit Court Judge David Navarro. The offender was not in court that day because he was admitted to Illinois Masonic Hospital on Chicago's north side for observation and treatment for self-inflicted knife wounds. The offender's next court date is in Branch 66 at 26th & California on 15 November at noon. 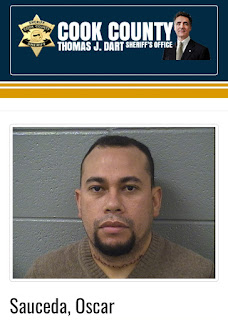 The victim was identified as Flor E. Navarrete-Soto. Villalobos told CPD Detectives at Area North that he stabbed Navarette-Soto 31 times because he believed she was being unfaithful.

Posted by Chicago-One News at 2:53 PM