Hunter is his name, and a hunter is what he became. Chicago Police were alerted to the recently convicted Hunter Best when he literally went on the hunt in the upscale Lincoln Park neighborhood of Chicago. The original charges he faced were one felony count of aggravated criminal sexual abuse, felony criminal trespass to residence, misdemeanor battery and Class X felony home invasion. The initial arrest information in the graphic below shows the limited information about their arrest of Hunter Best.

Area Central Detectives were assigned and later released video of this offender in two separate locations near where his offenses occurred. Detectives gave a physical description of this offender as a white male between 20 and 30 years-old with a light complexion, short brown or strawberry blonde hair, 5’7”, weighing possibly 160 pounds wearing a light-colored button-down shirt, sleeves rolled up, slim-type dark pants, and wearing white gym shoes. Detectives told the public they knew him to be a smoker.

Evidence collection from one crime scene this offender was at yielded an empty beer can and a cigarette, which prosecutors in this case said he could not be excluded from because a DNA profile showed only one out of 6.5 quintillion unrelated people would be a match.

The following record numbers will assist the public, and other properly interested parties to locate and obtain records relating to Hunter Best:


What The Investigative Case File Reveals

Chicago-One performed a Freedom of Information Act Request with Chicago Police, and the Cook County State's Attorney's Office, obtaining their records to find out why this offender was offered a sweet plea agreement, and how the investigation was carried out.

CWB Chicago reported the plea agreement between Hunter Best and the Cook County State's Attorney on behalf of the people of the State of Illinois on October 30th, 2019. 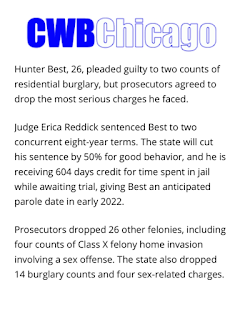 This case has two Chicago Police RD numbers associated with it, and two Chicago OEMC event numbers. The first case report was filed on 27 May 2018 after a 911 call made at or around 8AM that morning. The Beat of Occurrence was 1811, and the reporting officer on CPD Beat of Assignment 1812 (paper car) arrived at 9AM, according to the case report under RD# JB-280701 with Event# 1814705466, Case ID# 11327969. Dual UCR codes assigned for two simultaneous offenses as 1365 (Criminal Trespass to Residence) and 1563 (Sex Offense - Criminal Sexual Abuse) 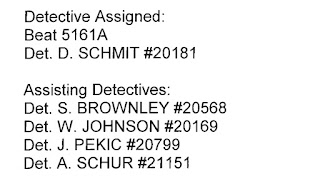 CPD made an error as to Detective beat assignment. The 51xx series is Area South. This was an Area Central investigation. The proper detective beat series is 52xx. Detective Schmit is actually beat 5261A, which is a team of Detectives, hence the letter "A" at the end of the beat number.

Detective Schmit was assigned this case on 27 May 2018 by Sgt Sullivan - Star# 2632, at 5:45PM. Schmit then carried-out his investigation which started with a review of the original case report. In the process of his investigation, Schmit then learns that 018th District Sgt. Vogt - Star# 845, received new information that Schmit should be aware of. This brings Schmit to 018 where he meets with Sgt. Vogt. Schmit then learns before he was assigned this investigation, 018 had a second report of a Criminal Sexual Assault. This new information comes about due to the astute observations of a Chicago OEMC Police Dispatcher on the 2nd Watch. 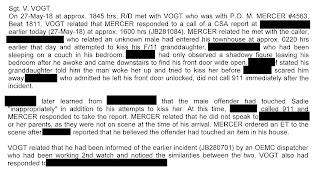 On 29 May 2018, beer can and whole cigarette submitted to Illinois State Police for DNA testing on ISP Request Form# 76202.

Cook County ASA Susie Bucaro witnessed the forensic interview of child victim-1 on 29 May 2018. Det. Schmit was also present as a witness. This was when things start falling apart for the offender in this case, as Det Schmit makes a one-line statement showing the child's version of events matches the parent's version of events.

Through due-dilligence and the help of a local property management company, Detective Schmit obtains useful evidence from video camera systems that allows him to update an earlier version of an Area Central Detective Division Community Alert.

Area Central Detectives weren't done yet, they weren't sitting around waiting for tips to flood their phone lines. These Detectives know that cooperation with police in the community is rare, only occurring when those who cooperate have incentive to do so.

On May 31st, Detectives continue chasing leads. An attorney for one person contacts Det. Schmit and informs him that video footage he sent multiple requests for could be picked-up later that day. Schmit then gets a call from a husband and wife saying they're "99%" certain "this is the offender" in reference to seeing the person of interest photos on the news. Detective W. Johnson - Star# 20169, gathered video footage from 459 W. Belden that showed Hunter Best in an alley, and Det. Brownlee obtained footage from a 7-11 that was later reviewed by Det Schmit and determined to not have any evidentiary value.

Footage gathered by Det. W. Johnson was inventoried and is reflected in the inventory list above.

Detective Schmit attends the forensic interview of child victim-2 at CCAC on 01 June at 9AM, and witnesses the interview with Cook County ASA Patrick Farrell. The interview concludes at 9:51AM.

This same day, Det. Schmit reviews the video footage from 459 W. Belden. The footage shows Hunter Best in an alley walking towards Cleveland Ave. around 2:14AM, and Schmit notes that this "appears to be the same male seen in the
[Redacted] alley footage". The 459 W. Belden footage is motion-activated, showing the male subject by the door of an apartment building, and he then disappears. Footage ends at 2:22AM.

Area Central catches a very helpful lead in the case when a woman who had a short-lived interaction with Best steps forward with her account of the interaction, AND jewelry that he gave her during that interaction. This woman saw the photos released by Area Central on the news, and upon hearing what he did, she becomes sickened and wants to help put him away.

Chicago-One will let Detective Schmit tell the rest of this woman's story about her interaction with Hunter Best. 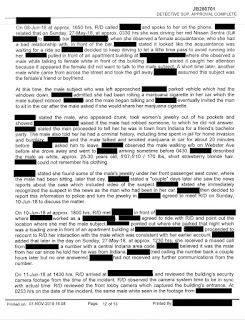 Schmit continues working the case from here, gathering more video from one more location, and then he interviews a woman working in an apartment building who says he was there and he sexually harassed her after he was told to leave because he failed to prove he had legitimate reasons to be there.

Cleared by Arrest and Prosecution 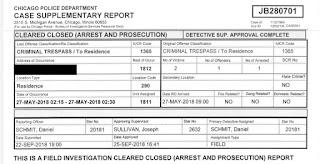 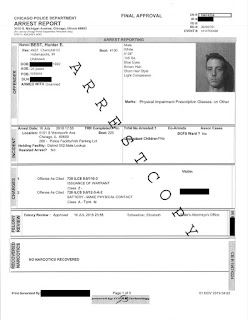 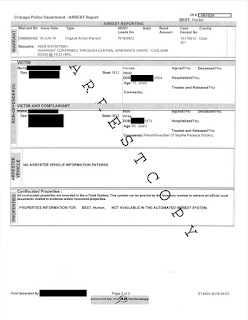 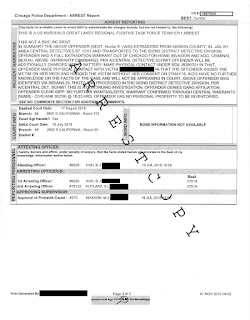 Area Central Detectives applied for several warrants prior to the arrest of Hunter Best. On or around 09 July 2018 by the U.S. Marshall's Service after State of Illinois Arrest Warrant# CW0054452 was issued. Best was transported to the Marion County Jail in Indiana, and on 11 July 2018, Best waived extradition, allowing Detectives Schmit and Schur to transport him to the Area Central Detective Division. That arrest was made on 16 July 2018 at 3:45PM. 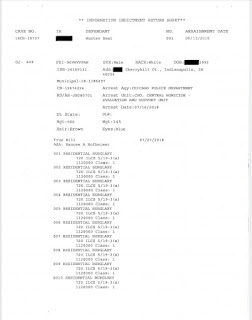 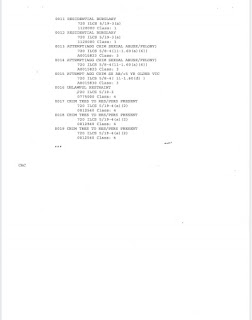 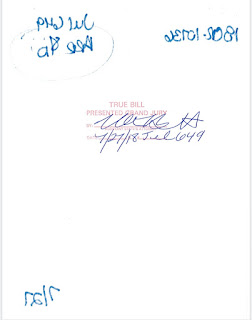 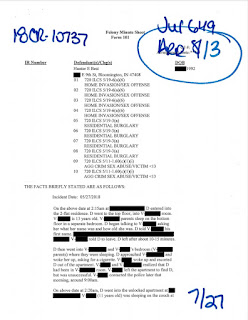 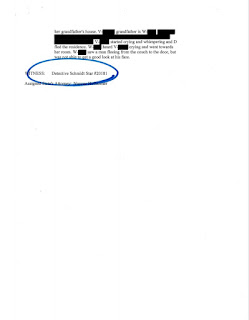 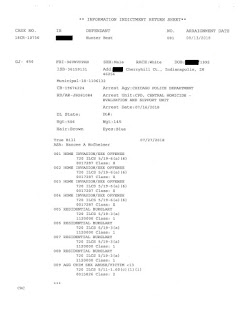 Nancy A. Hoffheimer was the Cook County ASA assigned to this case after CCSAO felony review approved charges. Hoffheimer is listed as having argued this case in Room 206 before Judge Erica L. Reddick

All of the source documents you see in-part, or in whole within this news article represent hundreds of thousands of dollars in manpower, investigative resources, and a litany of other things a city needs to be able to conduct in-depth felony violent crimes investigations. The source documents further show the public great insights into the psychology and criminal capabilities of a sexual offender who used alcohol to lower his inhibitions towards committing sex crimes against young children.

Most importantly, the source documents show the devastation done to two families and the child victims by way of the violation of the needed safety and security of their own bodies, in their own homes where ALL PEOPLE deserve to be safe, and free from violence.

Nancy Hoffheimer then does this 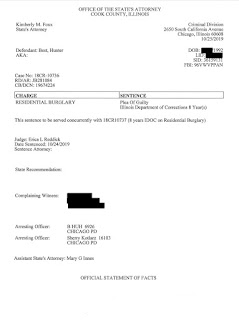 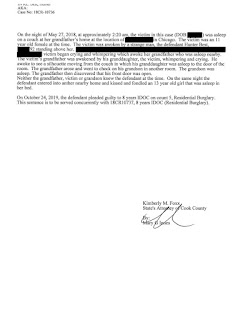