The Chicago Police Department has made progress in compliance with the current consent decree, two public news releases show. The first news release dated for September 30th, 2019, is titled "CHICAGO POLICE DEPARTMENT LAUNCHES NEXT INSTALLMENT  IN SERIES OF TRANSPARENCY DASHBOARDS -  Use of force data analytics featured in new dashboard as part of CPD’s effort toward increased transparency"

The release says "The Use of Force Dashboard, developed by the Department’s Strategic Data Analytics Division,  displays aggregate use of force incident data from information stored in CPD databases." and goes on to inform the public that the Use of Force Daahboard is updated monthly, and "displays the most frequent types of use of force  utilized by the Chicago Police Department. Dashboard visitors can sort and filter by race,  gender, year, police district and use of force options, and can also view multiple time periods,  dating back to 2015."

Khan came to the Chicago Police Department from the Village of Skokie, where he first served as a police officer for one year and three months before serving as a "Crime Analysis & Intelligence Officer" in Skokie PD's Special Operations Division fir 3 years and ten months. Khan was then promoted to Data Analytics Manager for Skokie's Village Manager's Office.

Khan received his State of Illinois Law Enforcement Officer certificate from the College of DuPage in September of 2007, with an expiration date of August 2017. Credential# 20077916. Khan graduated from the University of Illinois at Chicago in 2007 with a Bachelor's Degree in Finance, then graduated from DePaul University with a Master's Degree in "Predictive Analytics", an experimental and unproven pseudo-science.

Khan's coursework background should concern the public, as it shows that he has studied data mining, social network analysis, and data analysis in specific areas of study that are only undertaken by people with no ethical concern for the privacy impact on others that his areas of study inherently disregard. 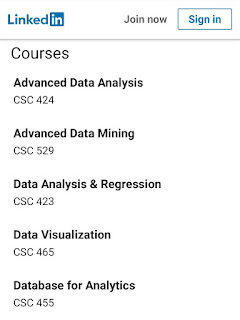 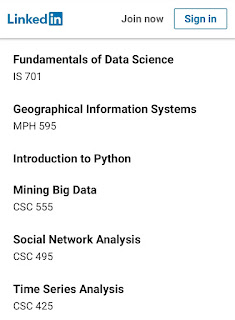 This collective evidence concerning Khan's background shows that he has aspirations of becoming a U.S. federal intelligence officer, and is likely using his Deputy Chief position at CPD to accomplish his own interests on the Chicago taxpayers' dime. This is further supported by his open admission on his Linked-In account that he has only been with the Chicago Police Department a short time, and NEVER served as a police officer on Chicago city streets. 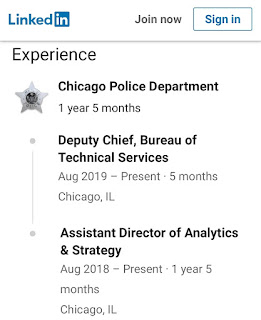 Moving on to the second CPD news release, it was dated for November 4th, 2019. That release has the title, "CHICAGO POLICE DEPARTMENT LAUNCHES NEW DATA DASHBOARD
AIMED AT INCREASED TRANSPARENCY  - Aggregate officer complaint data and analytics featured in new dashboard  as part of CPD’s effort toward increased transparency"

The November 4th, 2019 release says the new dashboard offers "an insight into investigations by the CPD’s Bureau of Internal Affairs (BIA), the website provides detailed data on status and outcome complaints dating back to January 2007, and also offers visitors an opportunity to file a complaint and to check the status of an existing complaint."

Further, that release also puts forth the following information


Here is a quick look at the dashboard main page 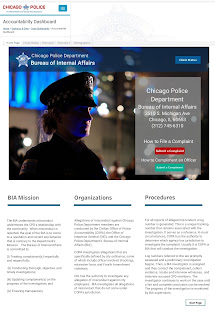 Posted by Chicago-One News at 9:07 AM