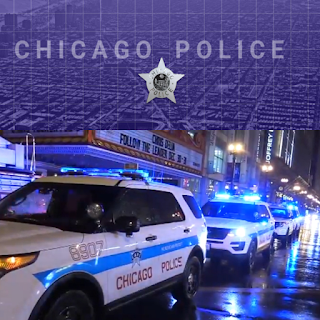 R/O's were assigned a robbery investigation at 11:43PM by the OEMC Zone-4 dispatcher. Information stated that northbound train 917, CTA Car 5247 was the scene of a male attacked by several offenders and bleeding from the mouth with CFD Ambulance enroute.

111A sent a flash message over Zone-4 at 11:48PM stating two victims, and offenders appeared to be a bunch of kids numbering approximately 7 to 8. Both victims were visibly shaken, and only able to give partial description of the offenders as African American, 17 to 18 years of age, one wearing black pants and some wearing jackets. Victims stated the group of offenders were mixed sexes (males and females)

The offender who took one victim's phone was described as a black male, with a grey jacket. The phone taken was an I-Phone 11.

Investigation by 166D revealed the group had come down to the platform at 11:53PM

One unit went to Jackson, and 166E went to Roosevelt. 121R went to the Grand stop.

Investigation by 111R revealed the train was at Chicago at 12:01AM

At 12:05PM, the zone alerted units to a call at 200 N. State wherein the caller stated he was on the train at State & Lake when a fight broke out between two groups of people.The zone stated their information came from the callback unit from a person saying they wanted to report it.

121R spoke to the train conductor at Chicago Ave who stated the teens fled from the platform to street level in an unknown direction around 12:02AM.

112R developed investigative information at 12:26AM that two offenders were seen walking west on Lake St. One offender wearing a green jacket, one with a black jacket on foot.