Disgraced fired former Chicago Police Superintendent Eddie Johnson wasn't only drinking and driving back in October of 2019, that same night just before a passer-by called 911 to report him asleep in the city issued vehicle he drove, the Chicago Tribune reported on 02 December 2019 that a source reported to them that Johnson was seen drinking at Ceres with a woman who was not his wife. Ceres is a cafe' at the Chicago Board of Trade Building. 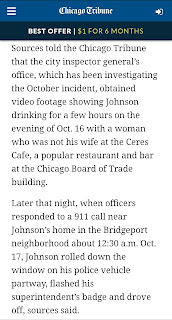 Earlier on 02 December, 2019, during the press conference where Mayor Lori Lightfoot announced Johnson's termination from the Chicago Police Department, Lightfoot dropped a hint that something was awry that she could not publicly disclose to prevent hurting Johnson's family. We now know what that remark was about. We also now know that it is alleged that Johnson abused his city issued police star, and therefore, his position of power to prevent his own officers from effecting a traffic stop.

The city Inspector General's report has not been published publically at this time. This is a developing story. Please check back for details.

Posted by Chicago-One News at 9:34 PM