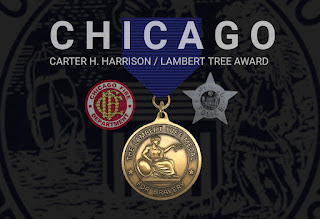 Chicago Police Officers from two districts have become good contenders for the city's Carter H Harrison / Lambert Tree Award today after acts of bravery in which human lives were saved as a result of their actions.

Officers in Chicago's 025th District answered a call on 29 December 2019 that was dispatched as a woman screaming for help.

Upon arrival, Beats 2534 and 2535 conducted an officer safety sweep of the property, making entry for fear of the life of the victim. The investigation then revealed a female victim with a serious head injury who was bleeding profusely from her head.

Further investigation led to the arrest of the offender on-scene

The victim was transported to a local hospital by CFD Ambulance 3, resulting in the victim's life being saved by the careful, quick actions of officers on Beat 2535.

Later in the evening, 012th District tactical officers on Beat 1261 were flagged-down by a citizen who told them that a robbery was in-progress at the Dollar Tree store on Madison & Kedzie with an address of 3146 w. Madison. This occurred at 8:13PM.

Upon initial investigation, 1261 found that the lights were on at that Dollar Tree store and had information that a woman was inside the store, identified as the girlfriend of the person who waved them down. 1261 further found nobody was coming to the door. 1261D called for more cars.

1261D split-up with one officer in-front and one in back. 1212 joined 1261D's partner in the back of the location. This is followed by 1261E giving a slow-down, saying they had the building covered.

At 8:21PM, the rear door of the Dollar Tree opens, and officers can see someone in the security office, confirmed by 1268B upon request of 1220. An officer requests to bang on the window and 1220 approves. 1220 then tells the zone dispatcher to get in touch with a key holder. 1268B then sees a person open the security Office door partially but they won't come out.

1261B keeps seeing someone perk out after this, and 1220 tells the dispatcher that the boyfriend was able to ping his girlfriend's phone to the store location. 1220 further remarks that all employees have a procedure they follow for leaving the store each night. All units are them told to keep every entrance in the rear covered, and that the manager is enroute with keys. 1220 requests a unit with a shield. 1234 responds.

8:36PM - 1220 states a unit is going to talk to the victims, says victims are tie-up and a search for a weapon is ongoing. Victims confirm 3 offenders and at least 1 pistol observed.

8:38PM - 1220 instructs OEMC to pull an RD number, notify Detectives, and get an E.T. rolling for "multiple photos" and confirms SWAT is on-scene

9:03PM - 1299 orders all offenders from the Dollar Tree robbery transported to the Detective Area

Chicago-One is now waiting on arrest and court details. Those will be posted here when that information is released.

Posted by Chicago-One News at 5:00 AM