The incident started with a shotspotter notification to the Chicago Police Department 007th District over the OEMC zone and the citywide simulcast that shots were detected at 5724 S. May. Next came a radio transmission from 0742R, the officer saying he has one running, followed by a rush of radio traffic. One officer can be heard at the end of simultaneous radio key-ups on the frequency saying "RACINE!! White t-shirt, pants, white shoes!!!" The zone dispatcher reads back the description as "white t-shirt, white pants, bandanna, white shoes running from the scene by the car wash"

With the next radio transmission, an officer screams "RIGHT THERE, RIGHT THERE!!!" This is followed by brief multiple key-ups, and a unit is heard asking for more cars "gimme more cars there's a person shot, we got a lot of people in this park." The dispatcher now says they're getting calls of another person shot at 5724 S. May. All hell breaks loose at this point with more brief key-ups on the frequency and a Unit saying he's got a female victim shot in the leg. Sirens can be heard in the background.

702S (007th District SDSC) tells the zone there's more rounds heard by the shot spotter over there, the zone dispatcher acknowledges, and a unit chimes in saying there is a female who is on the ground by a car who he thinks was thrown from the vehicle but not sure if she's shot or not. Another unit then says there are now 3 more victims shot:

1 self transport to the hospiral

1 lady shot on the street

1 unresponsive inside the house

"714 Robert, we need a timestamp for a tourniquet" timestamp was 00:38, according to the zone dispatcher. Yet another unit says two more shot at 57 & May. ZZ91973 is read-out by a unit just after this. Multiple brief key-ups on the zone compete for the frequency, one transmission comes out readable: "White Ford Escape" followed by "Don't let anybody leave, weapon has been recovered!" The zone dispatcher timestamps this at 00:39.

From that moment, radio transmissions are drowned-out by the chaos of the scene in the background, except for 767-Charlie (767C) requesting MORE CARS for May street. Another unit then tells the dispatcher "Squad, 5-7-2-4 south May, as many cars as we got"

The next unit wants to know how they can best direct CFD to the scene, suggesting they come South on May.

742R calls-in on the zone and asks for the RD Number for a 041A (Agg Batt - Firearm, Intent to Injure or Kill) and the dispatcher gives the RD and Event Number at the 8:54 mark.

767C wants to know if a slow-down was issued, and the dispatcher confirms.

"Did we send any cars to Saint B's?" Dispatcher says "not yet"

An unsuccessful call to 761A from OEMC Zone Dispatcher

Zone Dispatcher calls for 734R who tells the dispatcher they're inside the house, and the dispatcher send them to St. B's on tickets of walk-in gunshot victims. 742R answers, identifying themselves as the paper car. 742R says they're gonna go over there because they need information.

790R calls in on the zone, gives victim information

Dispatcher inquires about the woman thrown from the car who was mentioned earlier, wants to know if she's shot or injured.

706B mobile with partner: unintelligible

799 wants a total victim count. Dispatcher gives him a count of 5.

767 tells the zone dispatcher that they had to make forced entry to a portion of the residence in fear for the life of others after seeing bullet holes.

790 calls the zone dispatcher with a description of an offender

Ongoing investigation has so far resulted in a count of 13 people shot, four in critical condition, and two persons of interest in police custody. Victims range in age from 16 to 48 years-old. This incident occurred at a memorial gathering for a homicide victim from earlier this year whose murder was the result of gun violence. 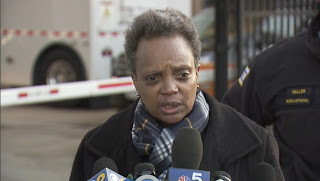 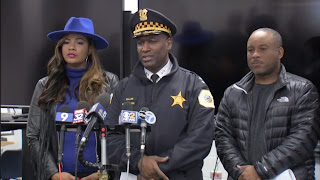 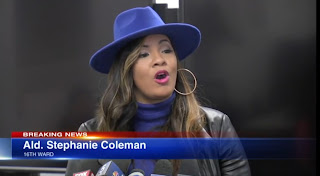 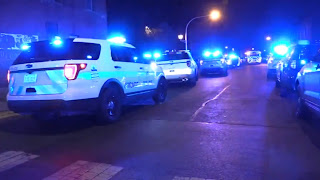 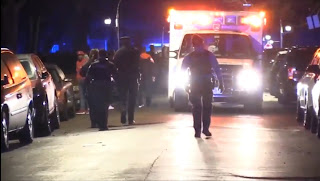 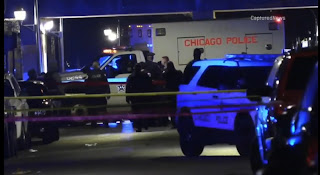 Posted by Chicago-One News at 3:52 PM