The voters of the state are all wondering what Governor Pritzker's first actions were as our 43rd Governor. What executive orders and pieces of legislation did he first sign as our newest Governor? What were his first photos, calendar entries, texts, and e-mails?

Chicago-One has those answers. A Freedom of Information Act Request to the Governor's Office produced a lot of insight into Governor Pritzker's firsts.


The first executive orders signed by Governor Pritzker were State of Illinois EO 19608 and 19609. EO 190608 is to Ensure Compliance with State Statutes, Transparency Laws and Data Publishing Requirements.

The elements of the executive order include:

• A requirement that every agency, board and commission review all statutory obligations and audit findings from the past four years and provide a plan within 60 days to address findings;

• A requirement that every agency board and commission review laws and regulations on publishing data and ensure compliance within 30 days;

• A requirement that every agency, board and commission review their data publishing practices - including past practices - within 60 days to move toward greater voluntary data disclosure.

• Require that the Department of Central Management Services and the Department of Human Rights shall review the state's pay plan to eliminate bias generated by asking employees for salary history, which often disadvantages women, particularly women of color. The State of Illinois will no longer ask prospective employees questions about salary history, because of historic salary disadvantages women face.

• Help protect workers from wage theft. The order directs the Illinois Department of Labor to expeditiously handle all cases of wage theft and day labor exploitation, including referring appropriate cases to the Attorney General. This will allow the administration to hold bad actors accountable and protect workers.

• Require that all state agencies comply with the Project Labor Agreements Act.


The Governor's first texts. Here's where things get interesting for Illinois voters! The Governor actually gave his FOIA office staff his State Issued cell phone for a photo op! 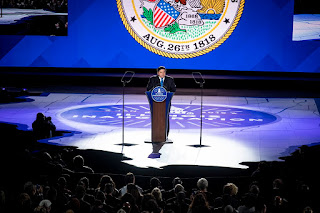 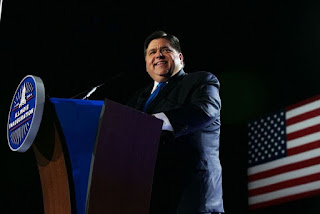 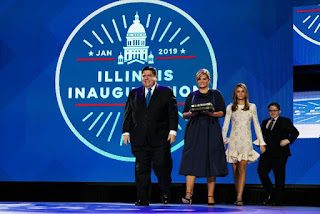 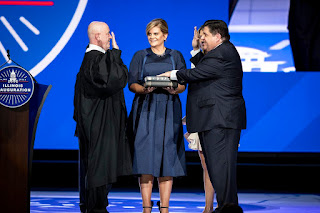 On Tuesday, January 29, 2019, Governor Pritzker faced the first ever statewide emergency involving the very lives of every single state resident when the State of Illinois experienced historic extreme deep-freeze temperatures predicted by the National Weather Service to bring the entire state into life threatening sub-zero degree weather with and without a windchill. The National Weather Service indicated at the time that the state would experience wind chills reach -55 in northern Illinois, -35 in central Illinois and -25 in parts of southern Illinois.

"This is a potentially historic winter storm that will bring extreme cold to our state and all Illinoisans must prepare," said Governor JB Pritzker. "Our administration putting into place an Emergency Preparedness Plan with key state agencies as well as warning residents about these life-threatening conditions. We will continue working with local officials to make sure they get the help they need to keep their communities safe."

Governor Pritzker then declared the entire state a disaster area.

"This storm poses a serious threat to the well-being of people around the state, and we will use every tool at our disposal to keep our residents safe," said Governor JB Pritzker. "This disaster proclamation ensures that the state of Illinois has the flexibility to effectively and efficiently respond to the needs of local governments during this extreme weather event." - Governor JB Pritzker

A state disaster declaration makes available a wide variety of state resources that can help affected communities respond and recover from the storms. The state of Illinois has mobilized personnel and assets to help local government officials with disaster response and recovery. (source linked to above)

The Chicago Office of the National Weather Service actively kept the public informed via their official Twitter account. On February 1st, 2018, they tweeted about how long the O'Hare area spent at a below zero temp, and the tweets are embedded here from the most recent to the earliest:

Chicago's current streak of temperatures below zero comes to an end with 52 straight hours below zero. Unofficially the 4th longest. #chiberia2019 15 hours longer than #chiberia in 2014.
— NWS Chicago (@NWSChicago) February 1, 2019

This morning's bitterly cold temperatures as "seen" by our high-res GOES satellite. Features like urban heat islands of Chicago & Rockford show up nicely in this image as localized "warm" spots. Green in this image is the coldest area, while light blue & gray are less cold. pic.twitter.com/03zlhqpr96
— NWS Chicago (@NWSChicago) January 31, 2019

Temps fell to -30°F or lower for several locations in north-central Illinois this morning. With a low of -31°F, Rockford broke its all-time record low since records began in 1905. Wind chill values were in the -35 to -45°F range for much of the area. pic.twitter.com/JPHcALiGew
— NWS Chicago (@NWSChicago) January 31, 2019

The official low temperature at Chicago this morning was -21F. This shatters the previous record for Jan 31st, which was -12F set back 1985. In records that date back to the 1870s, this is only the 15th time Chicago has seen a daily low this cold or colder, yesterday was 14th.
— NWS Chicago (@NWSChicago) January 31, 2019

At this time, Chicago-One is aware of ten deaths in Chicago related to this deadly deep-freeze.

A statement from the Cook County Medical Examiner's Office has been obtained by Chicago-One at 9:11PM this evening. The statement is as follows:

The Cook County Medical Examiner’s Office confirmed the 21st, 22nd and 23rd cold-related deaths of the season in Cook County.

The Office determined a 92-year-old man died as a result of hypertensive and atherosclerotic cardiovascular disease with hypothermia due to cold exposure as a contributing factor. The manner of death is accident. The man was pronounced dead on January 31 in the 9400 block of S. Parnell Ave. in Chicago. Case #ME2019-00503

The Office determined a 73-year-old woman died as a result of cold exposure. The manner of death is accident. The woman was pronounced dead on January 31 in the 2900 block of N. Meade Ave. in Chicago. Case #ME2019-00509

The Office determined a 62-year-old woman died as a result of coronary atherosclerosis with chronic obstructive pulmonary disease and cold exposure as contributing factors. The manner of death is accident. The woman was pronounced dead on January 28 in the 7200 block of W. Greenleaf Ave. in Chicago. Case #ME2019-00519

Last updated at 10:09AM, Saturday, February 23rd, 2019 to add the official State of Illinois Proclamation of Disaster document signed by Governor Pritzker
Posted by Chicago-One News at 1:36 PM No comments: