Most Chicagoans only know the most common and popular tidbits of Chicago city history. Ask any Chicagoan if they know the history of the relationship between the city government and the U.S. federal government, especially in the context of federal law enforcement and intelligence agencies operating their respective field offices in what became metro Chicago, and almost nobody can answer you.

Chicago is known for our financial district, which has a history of it's own, but someone had to protect all that currency from threats of the day, and no threat was ever as dangerous to Chicago's economy and its place in the national economy than counterfeiting operations.

Chicago-One will be checking the archives of the U.S. federal courts, the U.S. Attorney's Office, and the U.S. Department of Justice to find out how far their records of referred Secret Service cases go back.

Two other interesting facts were brought to light by today's Secret Service document release. The early Secret Service Chicago Field Office appears to have either kept records very badly, or the records may have been lost for two different time periods: 1878 to 1885, and 1881 to 1891 for an Assistant Operative named William Hall, who is noted to have started in Chicago from the bottom ranks as an Office Boy who died from tuberculosis in 1891.

In 1867, the Secret Service became responsible  for "detecting persons perpetrating fraud against the U.S. government" and twenty-seven years later in 1894, the Secret Service got into the most important and most highly classified agency work they continue today as their main priority.....the protection of U.S. Presidents.

At that time, the Secret Service Operative in-Charge of the Chicago Field Office was Thomas I. Porter.

Operative In-Charge Thomas I. Porter remained the head of the Chicago Field Office during this era, and completed his service in 1926.

Thomas J. Callaghan was the Secret Service OIC/AIC in Chicago during the December 7th, 1941 attack on Pearl Harbor. Callaghan served in that position from 1926 to 1945 as Chicago's 7th OIC/AIC.

The agency's records show that several decades later, during the most embarassing, dramatic, and tragic intelligence failure in U.S. history that occurred on 9/11/2001, the Special Agent In-Charge at the Chicago Field Office was Arnette F. Heintze. Heintze served the USSS Chicago Field Office from 1999 to 2003 as Chicago's 23rd USSS Special Agent In-Charge. 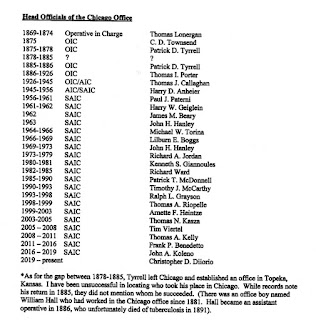 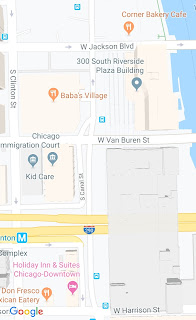 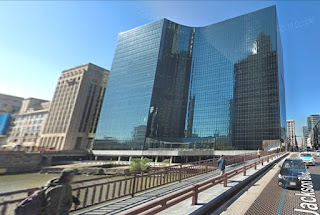 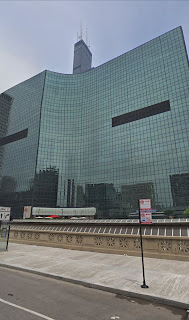 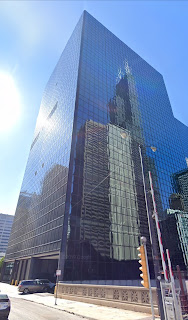 According to the corporate website for 300 S. Riverside Plaza, the building is "a 23-story Class A office tower containing approximately 1.1 million square feet". Secret Service records from today's release do not mention this past location. Chicago-One will attempt to secure the records for this location from the U.S. Secret Service for a future piece.
Posted by Chicago-One News at 5:08 PM No comments: