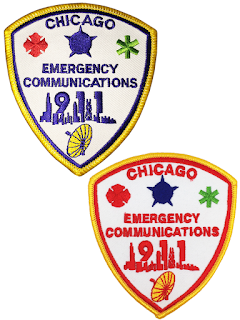 On December 06th, 2019, Chicago-One News received a tip from a source inside the workings of Chicago city government that the calltakers and dispatchers of the city's 911 operation, the very people the public depends on to send emergency help during moments of life-threatening danger are themselves routinely in need of emergency assistance due to what they say are shocking, life-threatening and inhumane working conditions.

The source who tipped-off Chicago-One News asked to remain anonymous in fear of retaliation for speaking out. The tipster stated that mostly female workers from minority backgrounds are forced into what amounts to a dangerous environment where calltakers and dispatchers who are often forced to work overtime are subjected to discipline for performing necessary female self-care, and are intimidated by supervisors and management into coming into work while sick with flu symptoms and symptoms of other various medical issues that normally would cause a reasonable person to believe that time off from work to seek medical care is needed.

The tipster also complained about unsanitary conditions at the city's 911 center.

That same day, Chicago-One News  performed a multi-part public records request under the Illinois Freedom of Information Act for the below items:

Internal memos and communications within OEMC administration offices between Jan 1st, 2016, and Dec 4th, 2019 regarding illnesses and health conditions occurring within the working environment of police and fire/EMS dispatch operations"

"Internal memos and communications within OEMC administration offices between Jan 1st, 2016, and Dec 4th, 2019 regarding illnesses and health conditions occurring within the working environment of police and fire/EMS dispatch operations"

"Grievances & complaints filed within OEMC police and fire/EMS dispatch operations relating to the treatment of female calltakers and dispatchers and health/safety concerns in the OEMC fire/EMS and police operations floors between Jan 1st, 2016, and Dec 4th, 2019."

Chicago OEMC responded to Chicago-One on 06 January 2020, stating that they have no sanitation or health safety policies at OEMC, but that "the city follows all federal OSHA guidelines with regard to health and safety (http://www.osha.gov)

The city contended that the rest of the request was unduly burdensome except for two items. Chicago's OEMC turned-over an Excel worksheet listing no less than 300 calls for Chicago Fire Department ambulance service to the 911 center itself for OEMC employees who experienced serious medical crisis while at work.

Beyond those 300 calls for CFD Ambulance responses, OEMC disclosed that they had two employee grievances on file pertaining to bug infestation, but bites occurring at an employee workstation, and unsanitary conditions filed on March 25th, 2016 and one on December 17th, 2017.

Below is a screenshot from the e-mail sent to Chicago-One News by Chicago OEMC. Text highlight performed by OEMC. The e-mail was signed by A. Martin, FOIA Officer for Chicago OEMC. 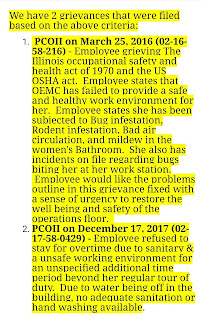 The 300 calls for an ambulance response included:

* 5 incidents of an unconscious OEMC employee,

* 24 calls for an OEMC employee being short of breath

* Several calls for things like hemorrhaging and head pain


Recently, just after the 2020 new year, a Chicago Police Dispatcher was heard on the air working while barely able to talk. A Chicago Police Officer suggested on the zone she take some medical time, to which the dispatcher replied "they discipline people for that".

Chicago-One News reached out via telephone on January 07th, 2020, to OEMC and spoke with Melissa Stratton, Director of Media, who stated that she was aware of the Chicago-One FOIA, and more specifically, a water main outage that OEMC disclosed to Chicago-One that took place and for which the below memo was sent out. Director Stratton requested an e-mail from Chicago-One regarding all of the issues discovered by Chicago-One. Stratton acknowledged that e-mail later in the evening on January 7th, 2020, saying "I’m looking into this but need to connect with some folks. I’ll circle back once I have more information." Chicago-One never heard back from Stratton after that.

STATEMENT FROM THE OFFICE OF EMERGENCY MANGAEMENT AND COMMUNICATIONS (OEMC):

"OEMC's operations are critical to the city of Chicago. Any known health, safety or unsanitary issue at the city's 9-1-1 center are addressed immediately. While OEMC seeks to maintain needed staffing levels for handling critical 9-1-1 calls, employees are not encouraged to come to work sick, nor penalized for taking medical time off.

As for the ambulance runs to the 9-1-1 facility during a three-year period, over 25% of those calls were refusal of transport to the hospital. Employees may experience sickness or shortness of breath for any number of reasons; however, any concern affecting the overall work environment brought to management's attention is addressed. Given the importance of the role of call taker or dispatcher and the nature of their responsibilities, it can be stressful at times, requiring full attention. Female call takers and dispatchers compose a majority of the total 9-1-1 workforce, with over 80% female call takers/dispatchers on the police side.

Employees on the OEMC Operations floor who are ill have many options to get well. For example, they may use sick time negotiated into their collective bargaining agreement, medical leaves of absence, and/or family medical leave time.

OEMC makes every effort to provide a safe, healthy and comforting environment, providing a Quiet Room, work out room, kitchens and recreational activities for employees' use to encourage health, fitness and comfort."

Stratton also noted that although the report showed 300 ambulance calls, "the previously issued FOIA report erroneously included test calls and calls for service that occurred externally near the building that reflected OEMC’s address. After reviewing it further with Fire Operations, it appears there were 221 calls for ambulances to OEMC."

Regarding the allegations made in the grievance shown here, Stratton provided this response:

The Illinois Department of Labor - Division of Occupational Health and Safety found no apparent safety or health hazards identified and there were no health or safety violations identified at the facility.

• Air Quality Reports indicated no anomalies. No dust deposition, no mold, no signs of insect/animal infestation and all humidity, temperatures, and CO2 rangers are in line.

• OSHA tested carpet and found no anomalies. OEMC addresses any carpet issue whenever an IOD report is filed.

• The OSHA found conditions at OEMC to be satisfactory on all fronts. The report specifically cites the fact that OEMC’s air quality was good, no bugs or rodents present and whenever we receive a complaint, it’s taken seriously.