The city of Chicago has experienced a violent, traumatizing start to 2020.

This report is sourced from city public records in the form of OEMC police radio recordings, and Open-Source intelligence.

1 minute into the new year, a Chicago Police Officer's marked vehicle was struck by gunfire through the windshield in the 010th District. 15 minutes later, a 24 year-old woman celebrating the new year in her home was struck by a stray bullet that came through her 2nd floor apartment window in the 011th District. Just minutes after that, Chicago Police in the 004th District were shot at from an apartment building. The shots are suspected to have been fired from 7847 S. Ridgeland.

The shots fired on Ridgeland resulted in a SWAT HBT response that wrapped-up around 6AM on January 1st, 2020 with no arrests. During the HBT portion of this incident, radio traffic indicated police experienced difficulty utilizing their SWAT HBT training. Radio traffic was heard wherein police told the Chicago Fire Department to enter the area from the wrong direction, resulting in CFD responders being in the line of fire and told to re-locate to a new staging area. Officers then had to be told to stay with their vehicles after officers were observed leaving their police vehicles. Yet another anomaly occurred when police were evacuating the building. Police brought evacuees out of the front instead of the rear, placing evacuees in the line of fire.

Police ordered a wagon to come to the scene for temporary detention of building residents, and gave the appearance that potential suspects were being detained together instead of being separated.

This incident took place at the corner of Grand and Neva on Beat 2512.

No injuries or deaths took place in any of the two above incidents.

Chicago-One now cautions readers, as the next part of this news story is easily upsetting to some, and involves the double murder of two young children, an attempted suicide, and an aggravated battery / attempted murder of an elderly person in the same incident. Less detailed reporting by the Chicago Tribune here. 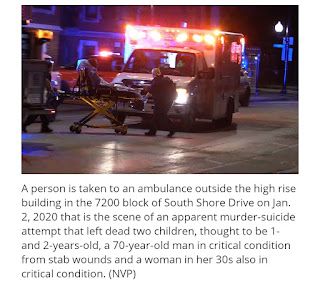 362 -D confirmed a crime scene and 62-E asked for an EMS response at 1:59AM. At 2:00AM, 62-E urgently called the zone dispatcher requesting an EMS response for a 2nd baby and an adult male. One member of the on-scene tactical team notified the zine dispatcher just seconds later that CPR had been started on the baby in the apartment. The dispatcher timestamped it at 2AM. 321-R was assigned shortly after.

CFD Ambulance 38 transported the adult female at 2:21AM

310-R - Notification to zone that each victim will have a squad car follow them to each respective hospital they go to - 2:31AM

Request for crime scene tape upstairs on the 11th floor - 2:39AM

At or around 4AM, the zone instructs 371-R to call news Affairs and the M.E. as soon as possible

6:24AM - 300 tells 323 to move their car so media can have better pictures and Area Central Detectives can do their work

6:50AM - 310 relocates to U of C to continue investigation of this incident

This effectively ends pertinent open-source response and investigative items for this incident. This is a fluid, ongoing investigation. Chicago-One will have more as it is made available.
Posted by Chicago-One News at 2:44 PM