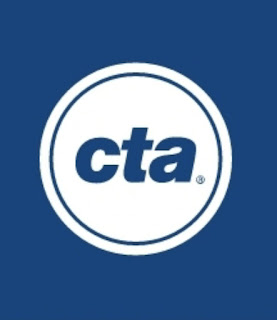 Millions of people travel on CTA rail lines each year, thousands or more per day as they make their way from point to point across the city. The prevalence of smartphones and HD cameras, as well as city-operated HD cameras aboard CTA trains and at CTA rail platforms have made photography & video recording of CTA buses, CTA trains, and CTA rail stations a normal part of life in the life of Chicago that is also something of a Chicago tradition.

Local Chicago photographer Barry Butler has snapped untold numbers of photos of CTA trains, and platforms over the years. Mr. Butler is a celebrated local celebrity for his work that has been featured in local major news media several times. Mr. Butler has a popular website, a Facebook and Twitter presence where his CTA photos and his other city based photos can be enjoyed by all.

Chicago-One was made aware of several complaints about CTA personnel telling contractors, and CTA passengers alike that the CTA has BANNED ALL PHOTOGRAPHY. 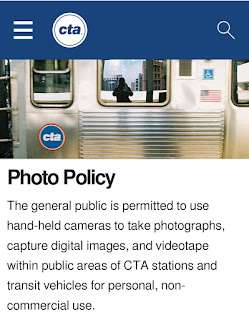 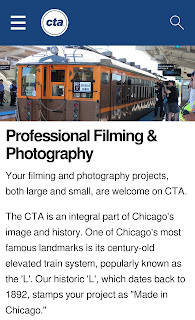 Chicago-One has spoken with CTA personnel on condition of anonymity because they weren't authorized to speak to the media. say they are instructed by their training and by their management that photography is not allowed, and CTA employees say the CTA photo policies on the CTA website are out of date and incorrect.

Chicago-One News obtained documents from the CTA pertaining to photography incidents between January 1st, 2018 and November 18th, 2019. The CTA responded with documents on 14 January 2020 after asking for a time extension.

CTA employees who tell the public that the CTA or some law they often are unable to quote, will often reference terrorism and will say that CTA emoloyees are to report all photography to U.S. federal authorities.

The CTA itself says in the FOIA response letter that they have no shared documents between itself, Chicago Police, or Homeland Security on file, at least for the timeframe Chicago-One had them search, which spanned well over a year.

The CTA handed-over 7 documents involving photography incidents. Those documents show that the information given to Chicago-One is true. CTA employees are acting on the belief that the CTA has banned photography and video recording.

The first incident occurred January 9th, 2018 at 4PM on the Irving Park Blue Line. The complaint states a student went to that location to do a class project with a hand-held DSLR camera. The CTA employee there told her photography is not allowed due to terrorism concerns.

The second incident of 2018 took place at the Addison Red Line at 3PM when a contractor employed as a photographer with intersection, and displaying a CTA property permit alleged to be invalid by the CTA Customer Assistant, was told he would not be given access to CTA property or allowed to photograph. The contractor's supervisor was involved by the contractor employee who is alleged to have said the CTA employee was incorrect.

Complaint number 3 came about CTA Brown Line Run 407 southbound at Western on September 27th, 2028 at 11:15AM. This complaint also involved a CTA contractor working for Intersection. The photographer was working while displaying a CTA property permit on the Brown Line, assigned to go car to car at each stop. The complaint states the train operator yelled at the intersection photographer, called control, refused to observe his CTA permit, refused to listen to anything he had to say, and waved him off.

On November 26th, 2018, once again, a Brown Line operator displaying the same behavior complained about on September 27th, 2018, was reported by telephone. The run number was 420, and the location unknown.

On May 03rd, 2019, a father and his young son were on the Blue Line at Washington when a CTA employee again acted on the belief that all photography & video recording activities were banned. The complaint is posted here to allow the father to speak in his own words. 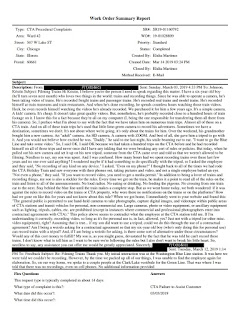 On March 29th, 2019, at the Wrstern Blue Line, a CTA customer states a person wearing a safety vest and who did not identify himself, "angrily yelled" at the customer while customer used a phone to snap a photo of an oncoming train. The customer states the safety-vest clad person harassed customer and "perpetuates his misunderstanding through customer harassment". Customer asked CTA to issue a memo to employees regarding the CTA photo policy.

The 7th complaint was dated for October 17th, 2019, and the narrative section is provided below.

Chicago-One confronted the CTA with the findings of this FOIA request. CTA Media Affairs offered no insight in these incidents, saying on this:

"CTA’s photography and video policy is located on the web here and reads as follows:

In general, simple personal (non-commercial) photography and video recording are permitted on CTA property and vehicles. Use of ancillary equipment, such as a tripod, or taking pictures or video of non-public areas of CTA property are not permitted.

CTA rail and bus operations employees who interact with the public are expected to be aware of our policy."

Chicago-One spoke with Barry Butler on January 17th, 2020 for roughly 23 minutes about these findings, and read the article to him. The conversation is recounted here in essence, not verbatim. Mr. Butler stated his surprise to have received an e-mail from Chicago-One on this topic wherein these CTA documents were obtained.

The conversation centered on Mr. Butler's experiences working as a photographer on and around CTA property. Mr. Butler states that he has not personally had any of the issues presented in these findings made by Chicago-One. Barry Butler's advice to all photographers if confronted anywhere with these sorts of issues is to walk away, saying that in essence a battle isn't worth the shot. During this conversation, Butler stated he had photographed with security right next to him and had no issues.

Chicago-One brought forth the idea that moving to a different spot might even get a photographer a better angle from which to hey the shot.

Mr. Butler further stated that his experiences working with CTA media personnel has been a wonderful experience with no problems of any kind.

Chicago-One asked Barry what he has planned for future CTA shoots, and he said with a smile in his voice that he has some ideas, and some may just involve his creative skill for using the sun and the moon. He said "it's all about planning, and hoping the weather cooperates"
Posted by Chicago-One News at 12:43 PM