Mass Shooting at West Side Barber Shop on Pulaski 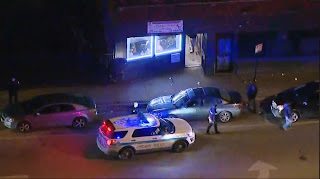 All other responding units were notified via OEMC Zone-10 to a mass shooting involving 5 victims at the above address.

At the time of the incident, victims ranged in condition from critical to serious. Victim conditions were later stabilized at local hospitals.

Offenders entered the above address, looked around, and exited the address. Offenders at that time drew weapons pointing in the doorway of the address, and fired multiple rounds striking five victims.

1120 assigned 1135 to Stroger with victims and report to 1131 for purposes of accurate documentation, and self-assigned himself to Sinai. One victim self-transported to Rush.

EMS ops entered through the north and exited south for rapid victim transport.

Timeline and assisting units as follows:

2 male blacks, 5 foot 10, 30 to 40 years of age, one wearing a grey jacket, both with short hair, one wearing an olive green jacket, fled on foot westbound on Maypole from Pulaski.

Zone-10 dispatcher had to tell units to keep victim information off the air.