Police Witness Suicide on McVicker After Footchase in 025

The Chicago Office of Emergency Management and Communications received a 911 call from a caller about a person trying the back door of the residence at 2174 N. McVicker

The incident unfolded at 12:51PM on 02 January 2020. Chicago-One review of the OEMC police radio recording reveals several police units keying on the Zone-12 frequency at one time, making it difficult to determine what happened. The police unit who yelled out "shots fired by police" on the zone barely got his traffic through the radio pile-up. Eric Tendian of the Chicago-based Crime is Down emergency services resource website recorded a portion of the events that occurred. Listen here.

The Zone-12 dispatcher sent the call out at 12:48PM. Beat 2532 volunteered to answer this call, and a backup unit was assigned. The call was sent across the zone as a burglary in progress.

The 25th District Commander was enroute to the scene at 12:55PM.

2563B confirmed on the zone that the person Police shot was being sought by them, saying "Bonafide, that's our offender". Area North Detective Unit 5314 confirmed they were on the way to the scene at 12:55PM. 5317A was also on-scene.

CPD detectives, ChicagoCOPA and Cook County Medical Examiner are investigating an afternoon shooting on the northwest side after a man appears to take his own life after a traffic stop, foot pursuit and armed encounter with officers. Here are the preliminary details. 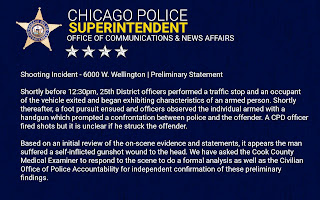 If you, or anyone you know are currently suffering from, or have have a history of suffering from suicidal feelings or thoughts, help is available. Call 1-800-273-8255

You may also visit the National Suicide Prevention Lifeline Online 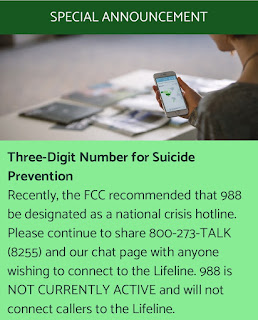 Posted by Chicago-One News at 5:21 PM