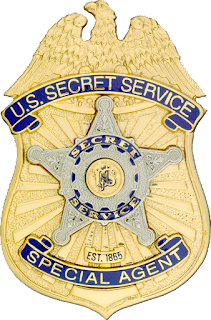 The U.S. Secret Service is slowly but surely releasing files regarding the agency's 2008 activities surrounding the November 4th, 2008 election of U.S. Senator Barack Obama as the 44th U.S. President, including the agency's activities in and around Chicago's Grant Park.

On Monday, January 13th, 2020, the U.S. Secret Service released 42 pages of documents to Chicago-One News as the result of a federal Freedom of Information Act Request, some of which were more highly redacted than others.

The file highlights threats made against Obama investigated by the Secret Service between the dates of November 1st and November 5th, 2008. The most serious threat the USSS responded to is one suspected to have been made by someone the agency referred to in a protective intelligence document as "a high ranking member of white supremacist group World Church of The Creator" 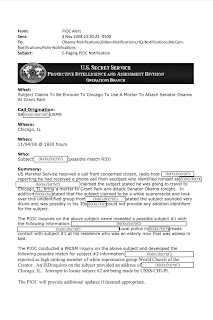 The above document shows that the suspect, only known as "subject 2", had an address in Chicago at the time of the investigation.

The World Church of the Creator is a white nationalist organization that was born from the white supremacist "creativity movement" founded by Ben Klassen (1918-1993) who committed suicide. Klassem was responsible for founding an organization recognized by his worldwide following as a "church" they called "Church of The Creator" until one of their "ministers" was found guilty of the murder of a black U.S. veteran. The person found guilty was George Loeb.

An individual named Matt Hale took over the group in 1996 after a lawsuit won by the family of the murder victim forced it out of business.

A check of the online FBI Records Vault maintained by the FBI did not return results, but that does not mean files on Klassen or his organization do not exist.

The same night on November 4th, 2008, the Rosemont Police Department stopped an individual with several weapons who the Secret Service was told had an interest in Obama. 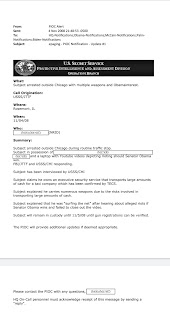 Yet another person with ties to Chicago caught the interest of the USSS when he got frustrated with the Obama campaign's text messages to his cell phone. See what he did to draw the ire of this agency by checking out or downloading the entire 42 page file below.

Posted by Chicago-One News at 2:19 PM