On May 14th, 2020, at 12:00PM, the Chicago Police Department and the residents of the city saw the retirement of a storied Explosives K9 Detection Officer named Mark Acana.

Mark was known among his fellow coppers as "The Flyin' Hawaiin" along with his K9 partner, Daisy.

Mark retired from the CPD Transit Security Unit (Unit 704) and was assigned Beat 7332. You can hear his retirement radio call here.

Mark Acana ended his time at 025 on 03 December 2008, starting a new district assignment in his same Explosives K9 Officer position in what used to be the 023rd District and later became 019.

On 10 December 2009, Mark Acana was detailed to CPD Unit 704, the Transit Security Unit. Mark was often heard on OEMC Citywide 1 during this assignment. His TSU assignment was to last until 15 June 2011, but he became a permanent part of that unit until 14 May 2020.

The Department marked his effective retirement date as 15 July 2020.
Posted by Chicago-One News at 3:37 PM No comments: 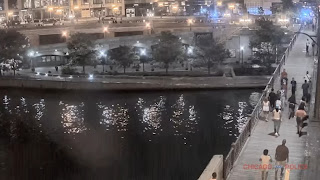 R/Ds assigned this investigation by Area 3 Sgt. on-duty after he was notified by a unit in the field of two people shot.

Unit 112 called out shots fired on Zone-4, and identified two victims. This unit was east of Wabash on Wacker.

0228AM tourniquet applied to female victim

CFD truck arrived at 0240AM

Total of 3 offenders as follows

Flash sent via citywide at 0253AM

In essence, and not verbatim, unless otherwise noted, at or around 2:35AM on the above noted date, at the address noted in this report, the 25 year-old female victim waved down a near-by unit stating she and another car occupant now identified as Gregory Crawford, needed medical assistance after being shot near the cross streets of North Wabash and Wacker.

The unit then notified Zone-4 for CFD response, and a tourniquet was applied to the female victim by the unit on-scene.

R/Ds relocated to Northwestern Memorial Hospital and spoke with medical staff who worked on both victims, and learned that victim Gregory Crawford had expired, and was pronounced by the attending trauma physician.

Investigation revealed the driver of the victims’ vehicle turned east onto Wacker Drive, and Crawford was in the front passenger seat. Crawford appeared to open the car door to get out before slumping to the ground.

Witnesses ran up to Crawford and started crying. A beat unit was parked near where the victims' dark-colored sedan came to a rest, outside the River Hotel at 75 East Wacker Drive. Officers ran over to the victims to provide help. Crawford was conscious at the time, and he refused to answer questions by an on-scene unit about the shooting. The 25-year-old female victim was uncooperative as well.

Investigation revealed the 001st and 018th districts received recent information from beat officers that sizable groups were gathering near the river in recent weeks, and some special attention monitoring had been assigned.

The still images displayed below show persons of interest in this investigation. See the surveillance video here. 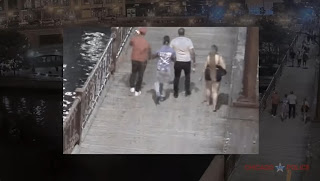 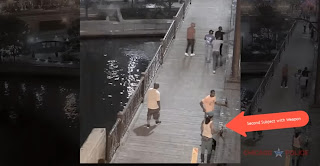 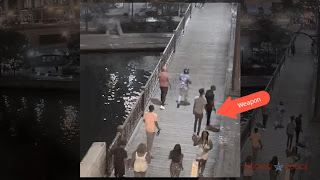 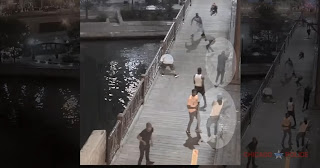 ANY PERSON with information related to this homicide should contact Chicago Police Area 3 Detectives Leavitt and/or Taglieri at 312-744-8261
Posted by Chicago-One News at 9:42 AM No comments: