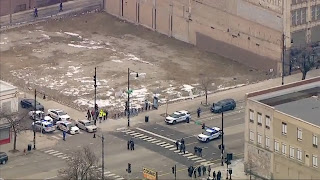 6255 (Area 5 General Enforcement Sgt) witnessed an offender produce a gun, and commit the offense of 1st Degree Murder, and pursued the offender who was in a white pick up north on Karlov from Wilcox. Immediately after this, shots were fired at the police, and the officer was struck in the right forearm. Immediately, a 10-1 was called. The Officer was transported by squad to Stroger after opting to first apprehend the offender. 6255 stated on the air that they have an undercover operation going-on there.

Pick up spotted, pick-up crashed at Congress/Damen one offender in ccustody with a weapon recovered at 2020 W Harrison.

The original shots fired with ShotSpotter notification at 4055 W Madison was for the Male victim shot in the head at Madison & Karlov, this was the homicide witnessed by the officer.

Media staging was at Madison & Keeler

Offender was taken to Mt. Sinai for medical evaluation 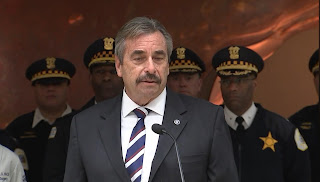 Interim Supt. Beck stated in a press conference moments ago that the officer shot is in his early 40s, and opted to pursue the offender instead of going right to the hospital.

Chicago-One notes the officer was involved in an undercover narcotics and gun trafficking operation, though Beck stated he couldn't say what kind of operation the officer was part of. The presence of the Narcotics Section Commander was the tip-off here.

When asked what agencies are involved, he refused to say.

The homicide and a separate crash scene near the hospital were both not connected to this incident.
Posted by Chicago-One News at 10:17 PM No comments: