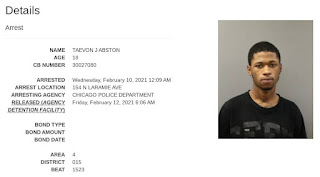 This report is not to be read alone, but with all other reports filed with Records Division Number JE-136516
All information in this report is in-essence and not verbatim, unless otherwise noted.

This case has other RD associations in a vehicular hijacking and robbery offenses committed prior to this homicide, and multiple other RD and CB associations are referenced in the investigation section of this report.
R/Ds were assigned this investigation by the on-duty A/4 VC/Homicide Sgt. after notification by 011th District field unit with regards to a homicide at 725 N. Trumbull on Beat 1121. R/Ds relocated from the area to the scene.

The below account outlines the initial response and investigation findings of responding 011th District units.

Beat 1121 assigned to information sent by OEMC Z11 that dispatcher had received numerous calls of shots fired and a call of a person shot at Trumbull & Huron, and Chicago & Trumbull. Fire responding but caller hung-up.Then info said 700 N Trumbull by the lot.
1114 arrived and located the victim now identified as QUILES, GUILLERMO at 725 N. Trumbull.

Z11 then received a call of 6 shots fired, and a brief description of two males one with a black coat and one with the grey coat running towards Chicago Ave. 1102-S (SDSC) was able to determine from camera footage that these two individuals were not the offenders, as they were standing in the street and smoking when the shots were fired and were merely fleeing for safety.

R/Ds learned through investigation that the offender identified now as ABSTON, TAEVON was one of three offenders involved in a robbery pattern of Dunkin Donuts businesses, and a vehicular hijacking.

2502-S advised Z11 at 8:19:06AM on 09 Feb 2021 that a vehicle with Minnesota plate [redacted], grey Chevy Equinox with a lock on the drivers side door wanted in connection with this investigation was last seen in 025.

During the 1st Watch on 10 Feb 2021, 015th District SDSC (1502-S) notified units that a stolen dark red Toyota RAV 4 was spotted at 154 N. Laramie. POD footage showed two male offenders, one being ABSTON with the vehicle, and ABSTON was on-scene when units arrived. ABSTON attempted to flee on foot, but was arrested by pursuing units.

ABSTON was searched incident to arrest by arresting units, and units recovered a handgun on ABSTON’S person. A 9mm weapon with a flashlight attachment fell to the ground during the search at time of arrest. Also recovered was the key to the stolen Rav4.

ABSTON was then transported to Area 4 Detective HQ. R/Ds started the ERI in the interview room where ABSTON was taken prior to his being placed there upon his arrival at A/4. R/Ds then entered the interview room and identified themselves, and informed ABSTON of the nature of this interview. ABSTON was given a copy of CPD miranda rights and Miranda waiver form which R/Ds read out loud to ABSTON. ABSTON stated he understood his rights and chose to speak with R/Ds.

Department records that were destroyed in accordance with Illinois records destruction laws, and multiple intelligence sources show that the New Breeds may have started as early as the 1950s as a gang called “The Goon Squad”, and were active into the 1960s. Illinois Circuit Court Archives may still hold investigative and historical intelligence value.

R/Ds learned of the identity of the 2nd ADULT offender, and the location of the stolen Equinox. ABSTON told R/Ds that the 2nd adult offender was the driver of the Equinox during the commission of this homicide, and some of the robberies. ABSTON identified a 3rd offender as being a JUVENILE, stating that the JUVENILE was the 2nd shooter at the homicide and 2nd gun offender during the hijacking of the Equinox and at the robberies.
R/Ds had the Equinox recovered on the 900 block of S. Central ave near where the 2nd adult offender lives.

R/Ds summoned the Cook County State’s Attorney’s Office Felony Review Unit who then responded to A/4.

Felony review released ABSTON’S adult co-arrestee without charges. ABSTON was charged with the offenses listed above in this report and transferred to the custody of the Cook County Sheriff at 26th & California. Bond court scheduled 12 Feb 2021 with Judge Arthur Wesley Willis. ABSTON held without bond.
Posted by Chicago-One News at 10:00 PM