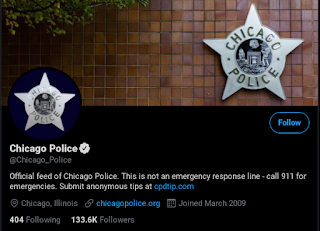 The 011th District has muted two of their own.....Tom Ahern, and the 025th District DCO. Alisa Hauser is also on this mute list. Alisa once worked for Block Club Chicago. Brother James Reiter also made this block list from the Conventual Franciscan Brothers.

015 has 6 accounts blocked. Of those 6 are two local Chicago accounts identified as Indivisible Chicago Northwest Side, and Concerned Citizen 606. The Concerned 606 account also shows up in the 016 block list with 3 other accounts also blocked by 016.
016 has blocked very high-profile, prominent accounts belonging to U.S. Senator Elizabeth Warren, former FBI Director James Comey, and activist David Hogg,. All of these accounts are displaying the Twitter verified blue checkmark.

018 has no one muted, but one blocked. 019 has nobody on their mute list, but has several people blocked. The 020th district has several on their block list, and their mute list features the popular Bike Lane Uprising account, along with the San Francisco Police Dept. Chicago PD Transparency shows up once again on 020's block list along with the Twitter verified account for Apple (the popular computer and phone company).

The 020th district has nobody muted, and one on their block list.