WGN and ABC 7 Chicago are reporting various snow totals across the greater Chicagoland area, and Governor Pritzker has declared a disaster. The ABC 7 Chicago video below shows some of the impact on Metro Chicago.

WGN reports "Lake-effect snow slammed the Midway Airport area with 17.7 inches as of Tuesday morning. About 7.5 inches were reported at O’Hare Airport".
The National weather Service Chicago/Romeoville office reported a wide range of snow totals from this snowfall from Feb 15th to Feb 16th, 2021. 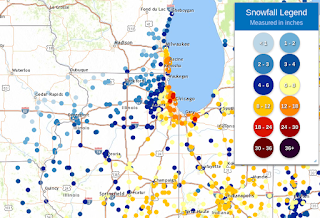 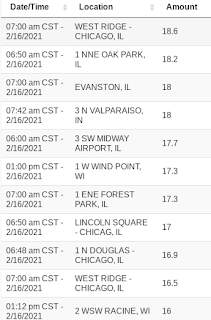 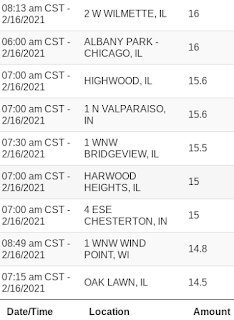 The Chicago Transit Authority reported numerous delays, the purple and yellow lines were shut down, and the CTA's north/south Red Line suffered delays said to be significant. All of this due to what the CTA said were switching problems, and weather related issues. Adding to these delays was a death at the CTA Forest Park Branch of the Blue Line after a woman with a knife who was acting threatening and erratic per OEMC radio recordings from Zone-10, threw herself onto the tracks.

Today as of 2:34PM, these were the CTA train system status notifications at the CTA's official website

The CTA posted alerts for at least 25 bus routes, so you need to plan extra travel time today. The routes affected are listed below:

#9 Ashland Temporary Reroute at Ashland/89th - 9 Ashland buses are temporarily rerouted via Ashland, 87th, Western, 95th, and Ashland due to street blockage near Ashland/89th. 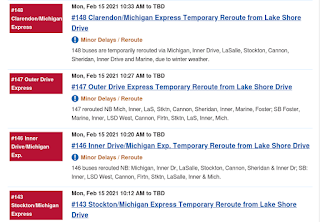 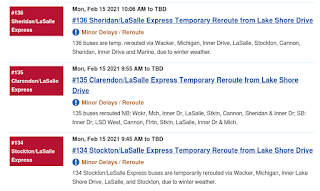 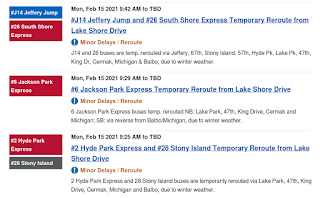 Metra spokesperson Meg Reile issued a statement regarding Metra service. Metra Electric and Union Pacific North lines had delays due to vehicles that got stuck on the tracks. Metra's Union Pacific North experienced delays in Wilmette and Winthrop Harbor due to the same issues as the UP North.
Several new photos of Metra trains operating after the storm were posted in a public facebook group by a Metra employee. That same employee also posted a photo showing how Metra was preparing in Elgin for their morning run. 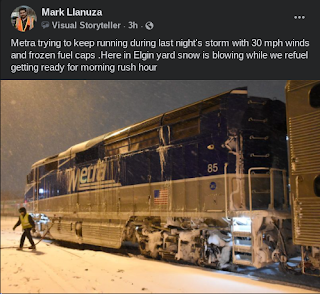 According to the Chicago Tribune, "As of 9:15 a.m., more than 150 flights had been canceled at the city’s two airports. O’Hare International Airport had 82 cancellations to Midway Airport’s 73. O’Hare had an additional 105 delayed flights, while Midway counted only 3 delays. Most delays at O’Hare were no longer than 30 minutes."

Believe it or not, spring is less than five weeks away. Until then, winter continues unabated in Chicago.

Please drive slowly, give way to snow plows, and keep distance between the car in front of you as visibility remains low.

If you're driving in he mess left behind today, check your road conditions here at getaroundillinois.com, an official IDOT site.
Posted by Chicago-One News at 2:38 PM