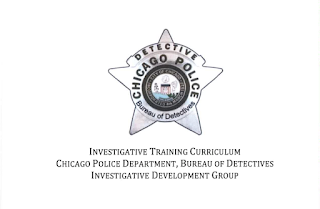 Soaring violent crimes stats in Chicago mixed with the effects of secondary/vicarious trauma on the Detectives who work these cases has too often meant that Detectives can become indifferent, insensitive, and they just as often refuse to talk to the victims and their families. This leaves violent crime victims and their families without the transparency they deserve. Detectives need victim and witness cooperation, but how can these individuals cooperate when they have no idea what the investigation process looks like? Detectives are at a loss because of decades of documented corruption within the Chicago Police Department involving the torture of suspects based on race, leading to hundreds of false confessions; the mistreatment and abuse of activists and protesters dating all the way back to the 1968 Democratic National Convention which sparked an FBI investigation, and then the more recent shootings of minors LaQuan McDonald and Adam Toledo.

For many decades, the residents and visitors of the City of Chicago have had serious questions about what the training of Chicago Police Detectives consists of. How many classroom and field training hours do they get? What is it exactly that violent crimes Detectives are being taught? HOW are they being instructed?

Many victims of violent crimes and their families have no idea where the report goes after they make that report. They have no idea what the priority system is, or what happens during case management and the process of getting the case assigned to a Detective. Victims and their families almost never have any idea what happens during scene processing, evidence collection, and evidence testing. Who are the case Detectives working with?

The Chicago Police Department's Investigative Development Group, the training authority of the department's Bureau of Detectives, is responsible for teaching Detectives everything they know, and making sure they are taught how to put everything they learn into practice.

Chicago-One submitted a Freedom of Information Act Request to the Chicago Police Department FOIA Unit back in 2019 for the complete Chicago Police Department Detective training course. The FOIA Unit pretended to have "lost" the request, and then dragged their feet for months until Chicago-One sued in Cook County Circuit Court. Attorneys for the city relented before the case could make it into the courtroom, and produced the 1,500+ page manual in early 2021.

The release of this manual has been decades in the making, and thanks to the help of Matt Topic and his team of FOIA attorneys at Loevy & Loevy, the residents and visitors of Chicago will now have a higher level of transparency regarding violent crimes investigations. Victims and their families deserve answers. Today, they get to have those answers.
This file was initially embargoed by Chicago-One while some legal details were sorted out. This release was planned to be done incrementally in a series of news articles, but then the wrongful raid of the home of Anjanette Young was uncovered, followed by the shooting of 13 year-old Adam Toledo by 011th District Bureau of Patrol Police Officer Eric Stillman, followed by the tragic shooting of 7 year-old Jaslyn Adams which resulted in a surveillance operation against one of the people accused of participating in her death wherein Chicago Police then shot the accused who was identified by police as 18 year-old Marion Lewis. Police say they saw him attempt to carjack a car with a family inside and recovered two guns.

Chicago-One decided that this manual needed to be made public without any further delay.

See the full manual below as produced by the Chicago Police Dept FOIA Unit
Posted by Chicago-One News at 5:30 PM