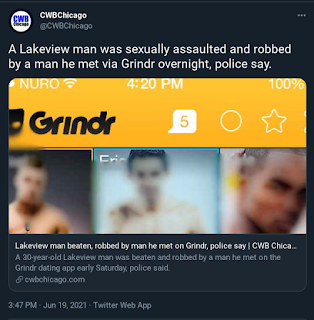 On June 19th, 2021, at 3:47PM, the popular CWB Twitter accunt posted a link to their blog in which they reveal that a gay man was sexually assaulted by a Grindr dating app contact he invited to his home.

According to to the CWB blog, "A 30-year-old Lakeview man was beaten and robbed by a man he met on the Grindr dating app early Saturday, police said.

The victim told police he invited the man to his apartment on the 500 block of West Aldine around 3 a.m. After entering the unit, the offender punched, sexually assaulted him, and robbed the victim, according to a CPD report. He also transferred money out of the victim’s account using Venmo, the report said.

Detectives and an evidence technician were at the scene around 5:30 a.m. The victim declined medical attention, police said. Area Three detectives are investigating the case." - CWB quote

Shorty after the CWB blog posted to the popular twitter account, the blog's followers started joking about the sexual assault and blaming the victim. Because the Twitter users in question did not act to make their accounts private, a feature allowed by Twitter that is available to all Twitter users, the tweets are posted here without redaction or blurring.
One Twitter user stated "He got what he wanted", and yet another said "...if you invite a grindr contact to your home at 3am, isn't sexual "assault" kind of the point?"

This is not the first time CWB has posted about a sexual assault occurring in the city, and it also isn't the first time CWB has allowed their Twitter followers to joke about and post attacks either towards a victim or the accused offender. This is also far from the first time Twitter itself has done nothing to stop their users from posting jokes and attacks against sexual assault survivors, or those accused of such crimes.
A CWB follower with anti-trans rhetoric in their Twitter bio quote-tweeted the original CWB tweet, saying "Local area man gets exactly what he wants from gay sex app" 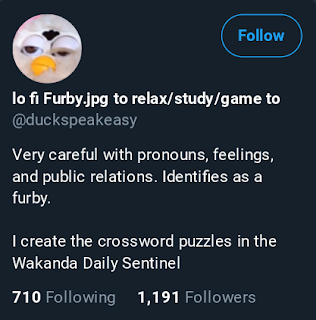 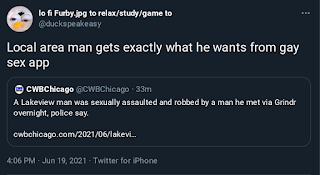 On June 17th, 2021, CWB posted about an attempted criminal sexual assault allegedly committed by a man who they say was supposed to be registered as a sex offender. The victim was a cisgender woman. This time, the tone of CWB's followers was more compassionate. The differences between the behavior of CWB's followers on June 17th, 2021 was starkly different than when a gay man was sexually assaulted. 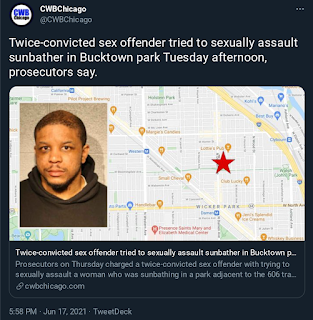 The comments were still violent in this June 17th Twitter post, but not towards the female victim of a male offender. CWB instead allowed their followers to make violent and racist comments, and comments that would tend to incite violence towards the accused offender. One such Twitter user following CWB known as "South Loop Groyper", said "I appreciate the use of mugshots. The race of these super predators must be known."

Another Twitter user known as @sarcasticjohn in that same tread used rhetoric that would be defined as inciting violence, saying "Where are the violent shooters when you need one?"

At the end of the thread on that date, a Twitter user known as "The Hebrew Conservative" posted a link to a racist an anti-science blog post at a blog of the same name. 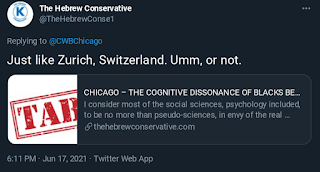 Back on March 26th, 2021, CWB posted about an accused offender named Antoine Jackson who allegedly was out on parole while he allegedly sexually assaulted a female victim. 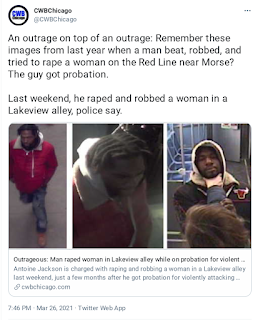 This particular Twitter thread features a Twitter account using the handle @FloydMBFay1 calling for vigilantism, with a second user calling for an "agonizing death" for an accused person who hadn't yet had a trial.

And of course, open and unmistakable racism, with a second user chiming in with a racist and false claim that equates reparations with criminality.

The evidence is clear that CWB has remained silent in the face of the conduct displayed here, and there is a clear pattern and practice that CWB has engaged in whereby CWB uses language and behavioral tactics not yet banned by Twitter that CWB knows is harmful to the public in order to incite these kinds of replies. CWB has not stated publicly what measures they have taken to work with Twitter on the issues displayed here, if they've taken any.

As of this time, the CWB Twitter account has 82.7K followers, a reach that make CWB and their followers a threat to public safety generally speaking when combined with their constant racism, misinformation, and disinformation. CWB is a threat to victims of violent crimes such as sexual assault when CWB stays silent on their followers literally harassing and blaming victims, and a threat to the constitutional rights of accused offenders who haven't had a trial due to the possibility of tainting any possible jury pool, any prosecutorial team, and/or judges who may see CWB's blog and twitter account.
Posted by Chicago-One News at 6:01 PM