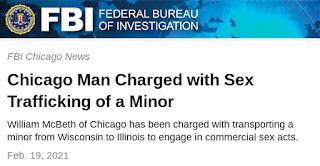 The Bureau sent the notification late, and that's why you're seeing it today. The public needs to know about these things ASAP.

CHICAGO — A federal grand jury has indicted a Chicago man for allegedly transporting a minor from Wisconsin to Illinois to engage in commercial sex acts.

The two-count federal indictment charges WILLIAM MCBETH, also known as “Tony,” 35, with sex trafficking of a minor and transporting that victim from Wisconsin to Illinois for purposes of prostitution.
The sex trafficking count is punishable by a minimum prison sentence of ten years and a maximum term of life, while the transportation charge is punishable by up to ten years. McBeth is currently in law enforcement custody. Arraignment in federal court in Chicago has not yet been scheduled.
The indictment was announced by John R. Lausch, Jr., United States Attorney for the Northern District of Illinois; and Emmerson Buie, Jr., Special Agent-in-Charge of the Chicago Field Office of the FBI. The Chicago Police Department provided valuable assistance. The government is represented by Assistant U.S. Attorney Michelle Petersen.
According to the indictment and a criminal complaint previously filed in the case, the minor victim was 15 years old in December 2015 when McBeth enticed her to engage in commercial sex acts in the Chicago area. McBeth transported her to various locations in Chicago and the surrounding suburbs to engage in commercial sex acts, and on at least one occasion brought her from Wisconsin back to Illinois for that purpose, according to the charges.

The public is reminded that an indictment is not evidence of guilt. The defendant is presumed innocent and entitled to a fair trial at which the government has the burden of proving guilt beyond a reasonable doubt. If convicted, the Court must impose a reasonable sentence under federal statutes and the advisory U.S. Sentencing Guidelines.

The Chicago Sun-Times reports McBeth repeatedly sold the 15-year-old for sex in and around Chicago in December 2015, and brought her to and from Wisconsin to be sold for sex at least once, according to prosecutors.
Chicago-One request for comment on this case submitted to the Chicago Police Dept was met by a reply from Kellie Bartoli, who said CPD will defer to the FBI since this is their case.
Posted by Chicago-One News at 10:00 AM No comments: